October 29, 2012
by CEA Content Creator
SHARE SHARE
With All Hallow's Eve right around the corner, we've enlisted one of our Alumni Ambassadors to help shed some light on another popular costume-friendly festival - Carnaval. Follow Ambassador Laurel Arlis from Illinois State University, as she describes her Spanish Carnaval adventure: 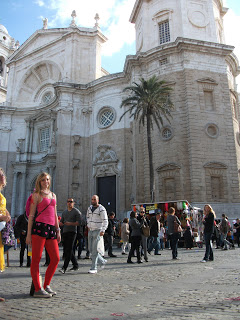 In February, my friends and I participated in a popular festival in Cádiz, Spain known as Carnaval. Think of a mix between Mardi Gras and Halloween, and that’s Carnaval. Everyone wore a costume and stayed out on the streets until 7am. Since it was around Valentine's Day, my friend and I wore red and pink and bought some cheap accessories and dressed as Valentines. Little did we know we would run into a few Cupids at Carnaval!

My friends and I didn’t plan a hostel so we bought a bus ticket for 15 euro each and left Granada at 9 a.m. I arrived at the bus station at 8:45am to find a sea of people in costume. I saw people dressed as pirates, hula girls, the Mad Hatter, Zorro, babies, Lady Gaga, you name it. Once the colorful crowd was boarded onto seven or eight buses, we began our journey.

After five hours of anticipation, we had finally arrived. I stepped off the bus and was blinded by the shining sun. It occurred to me that Cádiz looks a lot like Florida. There were palm trees lining the streets, beautiful white buildings, and the Atlantic Ocean that went out as far as I could see. The first thing I did was to take off my jacket and put on my sunglasses because in the middle of February, it was a comfortable 70 degrees.

We slowly began to make our way to the Cathedral. I say “slowly” because we kept stopping to take pictures with random people in their costumes on the street. A group of cows, some French men, and a bundle of bananas later, we found the Cathedral. 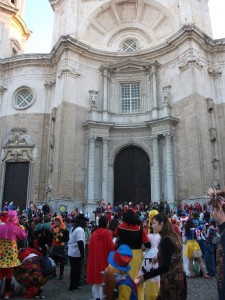 Within the next couple hours, the area around the Cathedral changed dramatically. It went from a little crowded, to not being able to move because there were so many people. During the day I walked across the plaza in five minutes. At night, it took 25 minutes of squeezing past people. There was music playing, green and red lights shining above everyone, and food vendors. I danced all night and met people from all over the world - even people from the suburbs of Chicago, near where I’m from. When we got tired of dancing we sat along the coast of the Atlantic Ocean and chatted with new friends until it was time to go home.

When we boarded the bus at 4:30am it was dark and cold out. The bus was as quiet as a grave because everyone was exhausted. I shut my eyes and when I opened them again we were in Granada and it was morning.

I’m so glad I had the opportunity to experience Carnaval in Cádiz despite how exhausting it was. The entire week after Carnaval I adapted the sleeping pattern of a Koala bear. I don’t know how Spaniards survive all of these festivals every year.