March 13, 2012
by CEA Content Creator
SHARE SHARE
Here in Granada, there are endless possibilities on where to go when it comes down to desserts. Walking down any given street, it is common to come across a small bakery, a pastry shop, a gelato place, or a hole-in-the-wall restaurant with the best sweets Granada has to offer.

For starters, there's Café Fútbol, right at the end of Plaza de Mariana Pineda, which is a simple five to ten minute trek from the residence hall. It is there that one can come across some of the best churros con chocolate in Spain. The churros themselves are crisp and delicious, while the chocolate is much thicker than what I was used to in America. But, the thickness is perfect for dipping a churros in, and savoring it all in one bite! 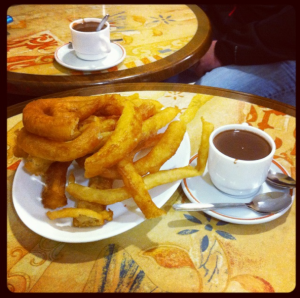 If churros con chocolate is not what you're in the mood for, fear not, for there are various other places to find a great snack. One of my personal favorites has become Rey Fernando, where one can find the best piononos around. You're probably asking, "what is that?" Well, a pionono is a traditional dessert from the small town of Santa Fe, which is near the city Granada. Essentially, it is a small spongy cake of a cylindrical shape that is doused in various syrups, and is topped off with a toasted cream. The below picture depicts a "Copa de Pionono" from Rey Fernando that consists of two piononos, pionono flavored gelato, whipped topping, and a cylindrical wafer cookie. 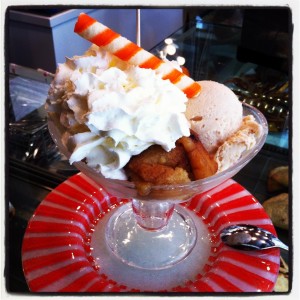 One can even buy a "Tarta de Pionono" which is the same concept of dessert, but on a larger scale (considering a regular pionono is bite sized and often consumed in a single bite)

The next picture is of a Tiramisu flavored pionono found at a different pastry shop. 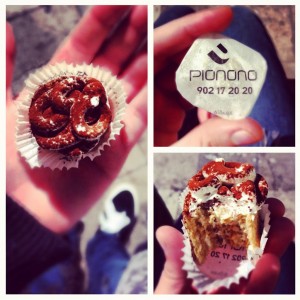 And this one is of yet a different kind of pionono from a shop that specializes in them.

If you find yourself in the mood for a less traditional dessert, or simply have a hankering for a slice of cheesecake or a muffin, Rey Fernando has got those covered, too! They offer a wide variety of sweets, as well as coffees and smoothies. 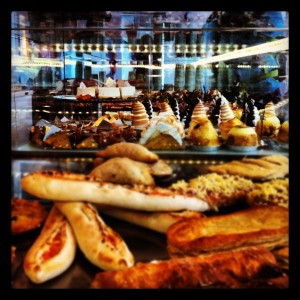 And if it's a fruit you're looking for, how about a granada (pomegranate) from Granada! 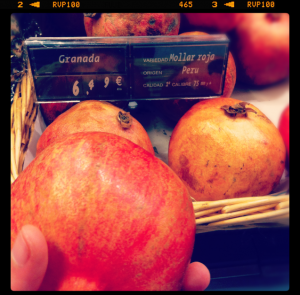 -Yelitza, CEA MOJO for Granada, España Read more about our CEA Content Creators.
Leave a comment
Newest on top Oldest on top
Load more comments
Thank you for the comment! Your comment must be approved first