February 21, 2012
by CEA Content Creator
SHARE SHARE
On the surface, Barcelona is in many ways a model of the 21st-century city with a multicultural population and streets filled with innovation, arts and modernity. However, lying below ground in different parts of the city are refugis aeris, public air raid shelters, constructed during the Spanish Civil War. They bear testament to the years between 1937 and 1939, when Barcelona became the first cities in the world whose civilian population was targeted for attacks from the air, despite the fact that the fighting of the war was taking place elsewhere. 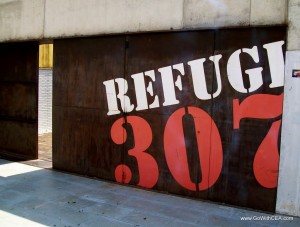 Situated in the “barrio” of Poble Sec, this shelter was numbered 307 by the civil defence organisation of the time, and approaching its entrance nowadays, at the bottom of Montjuïc, this number is proudly displayed in large figures. It wasn’t so for many years—during the Franco dictatorship, a glass factory was built on the site and the shelter was not rediscovered until the factory closed and was pulled down.. Intended to defend the citizens from the raids instigated by Franco and his army from 13 February 1937 onwards, these were built under houses, in metro stations and throughout the city, creating a virtual underworld and involving great cooperation between the people of Barcelona.
The “Refugi 307”, which was the number assigned to this one, comprised of over 400 metres of tunnels and with facilities such as a nurse or toilets, it could fit more than 1500 people at once in less than 3 minutes, which was the approximate time that citizens had to find a safe place when the alarm sirens started to sound.
It was impressive to walk through the same tunnels that people used to hide in to save their lives. It was also great way to better understand the History of Barcelona outside of the study abroad program in Barcelona classroom.

You have some more pictures of the visit at the CEA Barcelona Facebook page:
www.facebook.com/CEAStudyAbroadBarcelona
Read more about our CEA Content Creators.
Leave a comment
Newest on top Oldest on top
Load more comments
Thank you for the comment! Your comment must be approved first