October 14, 2011
by CEA Content Creator
SHARE SHARE
Night. Lamp-lit streets. A soft, sweet-scented breeze grazes the air as the fading sound of a guitar melody streams down the cobblestone walkway. In one direction lies a rectangular-shaped plaza crawling with life of all ages, and in the other sits a quiet cafe, nestled between the grizzled bricks of the old buildings. One of the many nights I spent in the streets of Madrid.

Commonly misunderstood as just another capital city, Madrid harnesses a lot more Spanish character, electricity and vivacious spirit than most people think. I myself had some speculations about studying abroad in Madrid in comparison to Catalonian hot spot Barcelona, or flamenco-dancing Seville. But had I known then what I know now about experiencing life as a madrileña, I would have never thought twice about choosing Madrid as my study abroad location.

Perhaps it was in the individual personalities of each city square or  in the distinctness of the scattered parks, but whatever it spawned from, Madrid's mystique nature sparked my city love affair from the beginning.

I have never lived nor traveled to a place so welcoming yet so mysterious at the same time - and I've bounced around the world quite a bit. It was like as soon as I arrived, the city extended its wide-reaching arms around me and hugged me into its culture - food, wine and friendly residents alike.

The gracefully architectured buildings and plazas invited me in as an observer, yet at the same time outwardly possessed a secret history only discoverable upon further investigation.

Take for example, the city's busiest plaza, Puerta del Sol. I must have walked through Puerta del Sol (or simply Sol as we called it) at least three times per day, but I would have never guessed beneath all the hurried, pedestrian shoes lived the starting point of all major Spanish roads (there's even a sidewalk plaque at 0 km)! The history hides everywhere here.

Not one day went by during my time in Madrid where I had a dull or boring moment. The city doesn't even permit that option. Anytime I felt the slightest pull towards the doldrums, my surefire solution was a trip to one of Madrid's districts or neighborhoods - my favorite was La Latina, the oldest area in Madrid with extremely quaint character. 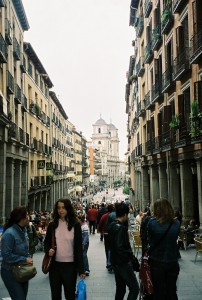 Sure, a lot of cities offer different neighborhoods for their inhabitants to explore, but in Madrid the flavors of the city's main areas each boast their own interpretation of the Spanish culture. So when I ventured through the antiquities of La Latina, I felt the essence of old-world Madrid, and when I strolled through Malasaña I experienced the rush of youth and creativity bathing the streets.

In each neighborhood, I felt like I viewed the city through a new pair of eyes and truly began to cultivate insider's point of view.

A Gem On Its Own

Having studied abroad in Madrid, I visited as many different Spanish cities as my time (and my wallet for that matter) would allow. I had heard all the rumors regarding how crazy fun Barcelona was and how studying in Seville would expose me to pure authentic Spanish culture, but after spending time in each high demand destination, the love that I nurtured for Madrid stood strong.

Now, I hold nothing against Seville or Barcelona, as the two cities both possess undeniably fascinating components, but the fact of the matter is that each city consists of completely different characteristics. I love Madrid for its people, its essence and for the impression it left on me. Had I studied in another Spanish city, these same three components would have had completely different meanings.

While Seville and Barcelona projected Spanish culture in their own, unique ways, so too did Madrid, making it difficult to even attempt a comparison. Each shines for its distinct characteristics that sit unparalleled by any set of standards.

I found it rummaging through the hundreds of street tents at El Rastro, I found it sampling pimientos de padrón and tortilla española in my favorite tapas bar, I found it laying under a tree at Parque del Retiro and wandering the streets around Palacio Real. I found my passion for life while studying abroad in Madrid, and looking back at my experience now I know that I could not have discovered it in any other location.

Maggie Zawalski is the Content Coordinator at CEA Global Education. She studied in Madrid during her Spring 2010 semester at the University of Colorado Boulder.  *Post also visible on StudyAbroad.com! Read more about our CEA Content Creators.
Leave a comment
Newest on top Oldest on top
Load more comments
Thank you for the comment! Your comment must be approved first