CEA Students to Run Half Marathon in Nice

Cailyn and I both arrived in Antibes not expecting to sign up to run a half marathon. In fact, it was far from the plans we had for France! We both have always been pretty active and were excited to see that this region of France, and in particular the people of Antibes, were very active people as well. On any given morning or early evening if you are out walking around town, you will see many runners running along the old parts of town and out along the beach. In addition, there are so many bikers that the town always looks like it has a petite Tour de France going on. So while I was a little worried about standing out while I ran here, we both found it really exciting and comforting that we could continue our hobby while here in France. Both of us found running around Antibes and the surrounding area the BEST way to get to know the new place we had just moved to. 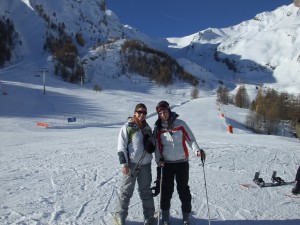 Cailyn and I began running together during the weeks, and began to explore different paths and roads. We eventually ventured out all the way around the Cap d’Antibes, and have enjoyed some of the best moments we’ve had here in France while out running along the gorgeous Cote d’Azur! In addition to exploring, Cailyn and I really got to know each other while running and have formed a wonderful friendship, which I know is half the reason we both run. So running for both of us has been a great way to get to know people here- a social activity and way to enjoy the area.

Kristin first told me about the ½ marathon in Nice and I mentioned it to Cailyn. We agreed that it would be so much fun to challenge ourselves to complete this race! In addition, we agreed it would be quite a different experience while we are here. How many people can say that they ran a half marathon while living in France? For these reasons we decided to sign up and just go for it! We are really excited to have a race to look forward to here, challenge ourselves with the event, and have such an accomplishment when we return to the states!

So you may wonder how we are training for this event while here? Well, our training began with taking a ski trip in the French Alps the second weekend we were here. This is where we began to prepare our legs for the hills around here! From then on we have continued to run during the week while we are in Antibes for classes. On the weekends we walk a lot around the different cities we travel to. The most important part though is the French formula for successful training. This includes at least a baguette a day, plenty of wine and cheese, and frequent stops to the many bakeries we pass along our running routes. Needless to say, there is no training program. We are really just doing the race for fun and our enjoyment while living here!! We plan to just try our best, and we’ll be happy with finishing!

For Cailyn and I, we are just excited that we’ve been able to funnel something we both enjoy so much into an event we’ll never forget while living in France!

Brittany Schmitt is studying abroad in the French Riviera this semester. She is a student at the University of Michigan - Ann Arbour.