My friend from the University of Rochester was perplexed as to why I was giving up my elected positions and school activities during senior year. He was even more curious why this American city girl wanted to go to… Argentina?

“No, doofus! Alicante is in Spain. And I want to be conversational in Spanish and travel around Europe before I graduate.” 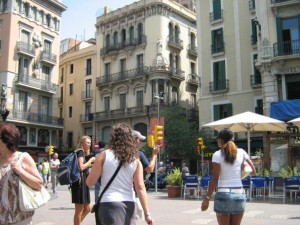 What he didn’t understand was that Alicante is located in la Costa Blanca, the beautiful Mediterranean coast in the south of Spain. What I didn’t know at this point is that I wouldn’t miss the big city feel during my time abroad; Alicante’s beautiful beaches, amazing weather, vibrant nightlife, amazing people, and interesting classes dampened the homesickness I felt during the past 2 months. Plus, it was easy to travel around Europe thanks to EU’s open border policy. And boy did I take advantage of it.

Have I mentioned that Alicante is located on a little slice of heaven called la Costa Blanca? I have never seen ocean with such clear hues of blue and green and I have never experienced such fantastic weather during the winter. And I know good weather, having been raised in San Diego. Unfortunately, San Diego’s beaches and weather has yet to hold a candle to Alicante’s assets.

As a popular vacation location, Alicante has an extremely vibrant nightlife. Its multitude of bars and clubs are open until 7 in the morning. Due to the large number of bars, chupitos or shots can be downed for as little as a euro. For a college student on a budget, creéme, this is a godsend!

And don’t get me started on the people I’ve met here. The Spanish are some of the friendliest and most outgoing people I’ve met. Alicante also attracts a large international student population and I’ve had the opportunity to meet people from all over the world! It’s not uncommon to go out with some Poles, Irish, Spanish, and Americans—friendships to last a lifetime.

As fun as the social interactions have been, I have also learned so much Spanish, which is the main reason that I chose Spain. The language classes are small and the professors are some of the most animated people I know. I went from knowing almost nothing to knowing enough to converse with locals, which has only  improved this study abroad experience.

Madrid, Ireland, Amsterdam, Milan, Valencia, Barcelona, Germany. YEP! Been there, done that. I had eye-opening experiences and met amazing people from all over the world. But during each adventure, I couldn’t wait to get back to Alicante. During the two months I had been here, Alicante has been my home and anchor.

Besos,
April, or as the Spanish would say, Abril

April Hu is a junior from the University of Rochester, studying abroad in Alicante, Spain. Thanks, April! Read more about our CEA Content Creators.
Leave a comment
Newest on top Oldest on top
Load more comments
Thank you for the comment! Your comment must be approved first