Rome Study Abroad Student Gets in Touch with His Faith

My name is Tim, and I'm writing from Rome, Italy, where I'm doing my study abroad this semester. Pretty cool, eh? I've already seen the Colosseum, the Roman Forum, Saint Paul's Basilica (still waiting to see St. Peter's and the Vatican), the Pantheon, dozens of other ancient Roman sites, and we even took a weekend trip to Mt. Vesuvius and the island of Capri.

All in the first two weeks!

With all that ground covered already, you would think that we've done nothing but sight-seeing, but on the contrary, we've had plenty of downtime, been going out to check out Rome's night life and have spent a good chunk of hours dining at some of Rome's many, many ristoranti, and pizzerie. We've been able to see so much because so many wonderful historical places are so close together, and everything is integrated right into the modern city, not set off to the side, or hidden inside museums. 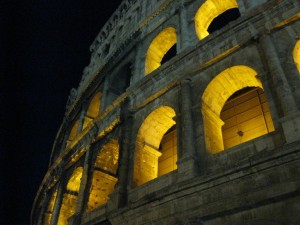 One more random thought: It's crazy how fast you take things for granted. Today I was walking past the Colosseum as the sun was rising behind it, on my way to class. No big deal ... Wait, no big deal? Two weeks ago that was one of the coolest things I've ever seen in my life! It's 2000 years old, still standing, and all manner of epic (and horrible) battles happened RIGHT THERE! OK, anyway, it is what it is. Here's a cool pic of the Colosseum that I took at night:

So, what do you hope to get out of your study abroad?

This is an important question to consider, and I'll admit that I probably didn't spend enough time thinking about this. My simple answer is that I want to learn and absorb as much Italian culture and language as I can while I'm here. The point of studying abroad, in my opinion, is to get a different perspective on the world than what we can get within the United States.

Already, I can tell that if this was my only goal, I could have picked a better place than Rome. The problem with Rome is that there is enough tourism and American influence, that you can live within your comfort zone for the most part. What I mean is, there are American-style bars, restaurants that cater to Americans, movie theaters that show only English films, and even an abundant amount of McDonalds. You aren't forced to immerse yourself into the culture; you can tiptoe around it, and you'll do it without even realizing it. That's kind of what I've been doing so far. Not intentionally avoiding immersing myself, but it's easy to gravitate toward things you understand. So, if you want to get the full cultural immersion, either be prepared to actively pursue it, or stay away from big touristy cities like Rome.

Luckily, I have a another goal for this semester: personal growth in my faith, which Rome is perfect for. I'm a Catholic, but I didn't attend a Catholic school, and I don't know very much about the Catholic faith. If you're not Catholic, you probably think Catholics are weird, or at very least they believe and practice weird things. The wonderful thing, though, is that all the practices of Catholic mass is born out of traditions and have real meaning. Many of these traditions were established in Rome, and what better way to understand what you believe than to learn about the beginnings in the place that the traditions started.

This week I went to the church of Santa Susanna, which is built over the home of Saint Susanna, a young woman who was secretly a Christian in the time that the penalty for being a Christian was immediate death. Saint Susanna was found out, and they tried to force her to denounce her faith in front of the Pagan idols, but she refused. She was found out and martyred by her uncle, who was a prominent figure in Rome, who hated Christians. It's amazing to hear stories like this, and see where these saints lived (and in this case were buried).

Hearing this kind of story, it's hard to doubt the existence of the Lord in these people's lives. How could someone possibly be so resolute in their belief that they will accept a horrible death instead of saying some simple words, unless God really did live in their hearts? If I had to make that choice, and when the chips were down, it would take a supernatural strength to choose to be a martyr. I certainly don't think I would be brave enough. Even if you don't share my same beliefs, I think there is a lot of value to learning about Christianity and Catholicism in the Eternal City.

I'm running out of time; my bus for Oktoberfest leaves in an hour! Hope you guys have a wonderful study abroad. I'm excited to see how much I've changed by December!

Tim Echtenkamp is studying abroad this semester in Rome, Italy. He is a  senior majoring in engineering at the University of Nebraska - Lincoln. Read more about our CEA Content Creators.
Leave a comment
Newest on top Oldest on top
Load more comments
Thank you for the comment! Your comment must be approved first