French Students Get a Taste of Arles on 2-Day Excursion

December 02, 2009
by CEA Content Creator
SHARE SHARE
Our Grenoble, France, students embarked on a two-day excursion filled with colossal sights, charming new friends, and authentically satisfying French cuisine. Our journey began at the Arles train station, where we walked past the monument showing where Vincent Van Gogh’s house once stood to the inviting and warm Hotel de L’Amphitheatre. 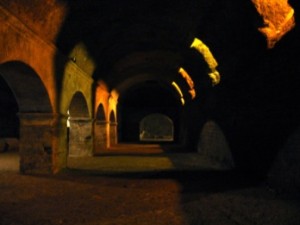 After checking in, we headed over to the Saturday street market to scrounge for deals and a bite to eat before meeting our guide, Vanessa. A trained architect, Vanessa speaks English and French perfectly. She lead us on an exploration of the history of Arles from Roman times, its medieval and Gothic architecture, Vincent Van Gogh’s contributions and torments while residing here, as well as the fact that Arles is considered to be one of France’s leading centers of photography. Our guided tour ended with an underground visit to the Roman cryptoporiques or subterranean passageway. This spooky, cavern-like space was built in the first century B.C. as an underground maintenance access site for what was once Arles Roman forum. A Regional Meal (Soupe de Poisson et Gardianne de taureau de Camargue) 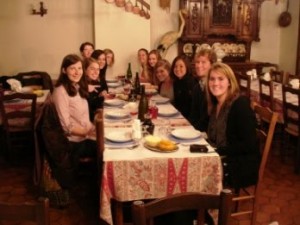 Knowing that some in the group may have never eaten fish soup, we sat down to enjoy a satisfying French meal after a long day of sight-seeing. This is how fish soup is made: Take a homemade crouton, rub it with a piece of fresh garlic, place a spoonful of rouille (a sort of rusty-colored, peppery garlic sauce) on the crouton and sprinkle it with shredded cheese. Place the prepared croutons in a soup bowl and ladle in the soup around them. The croutons soften (though remain crunchy) just enough to break with a spoon. The combination of textures and flavors is fabulous! We finished our meal and headed past the glowing Amphitheater back to the hotel to rest after a fulfilling day. The Camargue After a hearty continental breakfast, we said our adieus to our hosts and strolled over to catch a bus to the Mediterranean coastal village of Les Saintes Maries de la Mer. The 30-minute ride took us to the Rhone River delta area, known as the Camargue. The Camargue is famous for its salty marshes, wild black bulls, equally wild white horses, and an amazing assortment of owls, hawks, geese, storks, swans, egrets, herons and, of course, pink flamingos. The Notre Dame de la Mer is the highest point in Les Saintes Maries and is discernable from a distance of several kilometers. There we sought to witness the annual Pelerinage, or pilgrimage, dedicated to the village’s Patron Saints: Marie Jacobe, sister of the Virgin Mary; and Marie Salome, the mother of the apostles James, John and Lazarus. According to legend, the Maries arrived where the village now stands, after having been set adrift at sea from Palestine. This ancient seaside village also hosts the annual Roma (Gypsy) pilgrimage in May, honoring the Roma Patron Saint Sarah. We climbed the very narrow, internal staircase to the rooftop, where we waited for the procession to begin. The procession to the sea, lead by a retinue of Les Gardians or horsemen, lasts about 40 minutes and includes locals dressed in period costume from the early 20th century. Les Maries are carried to the shore where their arrival is re-enacted with much fanfare. Afterwards, everyone makes a mad dash back to the village to try to find a place to eat in one of the many sandwich shops or restaurants lining the narrow stone streets. No Horsey! 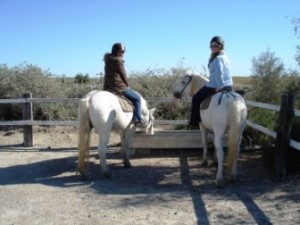 Having been inspired by Les Gardians, our equestrian urgings led us down the road to Les Cabanes de Cacharel, one of the many ranches dotting the coast and offering horseback treks. We opted for an hour and a half and were assigned horses according to our levels of experience. We were told our horses names – Grizzly, Sol, Pant-Pant (means to plod along) and Grisou – in order to be in command and tell them what to do in a more personalized manner. Apparently, horses have a keen sense of socially accepted behavior and greatly dislike being referred to as 'Yo, horse" or "horsey." 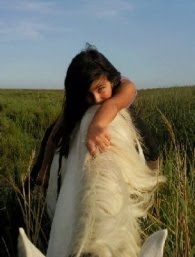 Our guide – 7-year-old, raven-haired Tess – led us along the coast through sand, wind, gravel and mud. We picked our way along roads, over canals and finally back to the shelter of the ranch and Tess’s mother and father, who were no doubt proud of their daughter’s first time leading a group of 25 horses with a bunch of inexperienced riders. With bowed legs and sore bottoms we climbed into our bus for the short trip back to the Arles train station. Our train arrived on time and everyone scrambled on board, searching for a comfortable place to rest. More than a few of us nodded off on the way back to our snow-peaked mountains and the city of Grenoble. Go to www.ceastudyabroad.com to discover how you can embark on your own study abroad adventures next semester! Create a MyCEA account so you can stay abreast of new programs and additions at CEA Study Abroad. Read more about our CEA Content Creators.
Leave a comment
Newest on top Oldest on top
Load more comments
Thank you for the comment! Your comment must be approved first