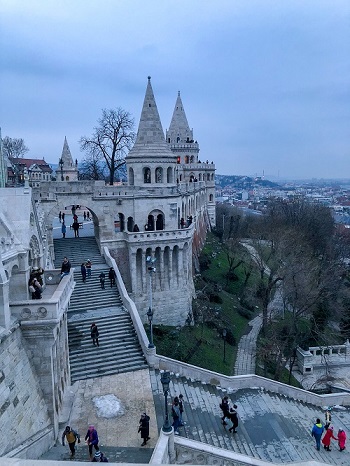 Budapest, made up of two ancient cities – Buda and Pest -- is a one-of-a-kind city with stunning architecture, a vibrant culture, and lots to do. When I traveled to this beautiful city, it was early February, but even the gray skies and cold weather couldn’t take away from the city’s natural beauty and welcoming atmosphere. I went to many of the well-known sites around the city and learned a lot about this unique country.

Here are my top seven places you can’t miss when you study abroad in Budapest:

1. Free walking tour – One of the first things I did in any city I visited while abroad was take a tour, usually a free walking tour. Most cities will have free walking tours that take you around the city and show you the main sights while giving you some of the city's history. Walking tours are a great way to see a new place and learn more about where you are. The tour guides are also great sources of information on the best restaurants and places to go outside of the tour.

2. Parliament building – When I got to Budapest, one of the first things I saw was the Hungarian Parliament Building, which is where Hungary’s National Assembly is located. Guided tours are available when the Assembly is not in session for about 4,000 Hungarian Forint, which is less than $15 USD. On the tour you can see the various government spaces there, like the House of Lords, and also see the Hungarian Crown Jewels. Near the Parliament building, along the bank of the Danube River, sits the “Shoes on the Danube” memorial. These shoes represent the Hungarians who fought in World War II. There is also a beautiful view of the Buda side of the city from this point.

3. Thermal Baths - Budapest is located on top of 123 hot springs, which have been used to build nine thermal bath houses throughout the city and have become one of the most popular things to do for tourists and locals alike. The baths were first used by the Romans in the 1st century AD. The two most popular bath houses are Szechenyi and Gellert. I went to the Szechenyi thermal bath when I visited Budapest, which has 15 indoor and three outdoor pools and costs about 5,500 Hungarian Forint or about $20 USD for a daily pass. The bath houses are open year-round, as are the outdoor pools they have. It often costs less to enter and is less crowded on weekdays than on weekends, too!

4. Central Market - Budapest’s Central Market was one of my favorite places in the city. The bottom floor is a traditional market with stalls for meat, fish, produce, and more that tourists and locals can walk around and get something to eat. The top floor has many souvenir vendors and food stalls where you can try traditional Hungarian foods, like langos (pronounced: lahn-go-sh) which is deep-friend dough topped with different foods. I got one topped with ham and cheese when I went, but I also saw langos topped with pizza ingredients, vegetables, and more. 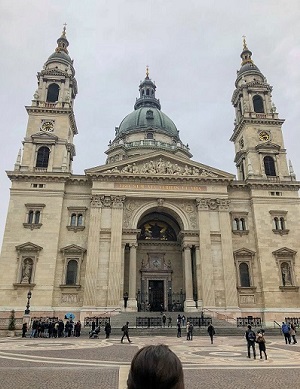 5. St. Stephen’s Basilica - Located in the center of the city, St. Stephen’s Basilica is the third-largest church in Hungary and can hold up to 8,500 people. Named after the first king of Hungary, Stephen, this well-known church allows visitors to take guided tours of the Basilica or head up to the observation deck and look out over the city.

6. Buda Castle - Buda Castle sits on a hill overlooking the Danube River and the city. Now the location of multiple museums, the castle is one of the main sites in Budapest. When I visited, I walked around the Castle district, which includes the Castle complex, the surrounding neighborhoods and Fisherman’s Bastion. There are many shops and restaurants to visit in this area and some of the best views of the city can be found here.

7. Fisherman’s Bastion - Near Buda Castle and by Matthias Church, Fisherman’s Bastion is a terrace that stretches along the banks of the Danube and has beautiful panoramic views of the city. There is no fee to walk along the paths and onto the balconies and turrets. This was one of my favorite places in the city, and the views were amazing!