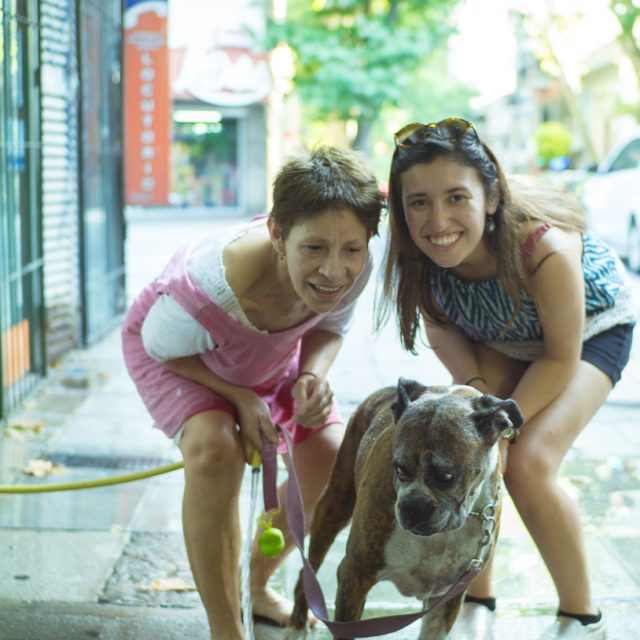 Porteños seem to be some of the most welcoming people in the world. Whether I need directions or I want an excuse to practice Spanish, Argentinians are always willing to help. A prime example of this would be my interaction with Gloria Esperanza.


I met Gloria during my  first weekend in Argentina. While walking by a busy street corner in Palermo, I paused to admire a group of six various sized dogs. Although my attention was on the dogs, my camera caught the focus of the woman walking the animals. Within seconds, the woman asked me to take a photo of her and all the animals. Specifically, she owned four dogs and the other two belonged to her sister and son. She explained that it was almost her 62nd birthday and she was looking to upload a celebratory photo to her Facebook account. After taking a few pictures of Luna, I got Gloria's email and I sent her a few of the photos from her quasi-photoshoot.

Gloria responded to my email and said she appreciated my work. Specifically, she said, "Sos UN REGALO DE DIOS," which translates to, "You are a gift of God." I chuckled at her praise and responded by saying that I hope we meet again. One week later, I ran into Gloria again. Once I returned home, I got on my computer and emailed Gloria my favorite photos from our second encounter. An excited Gloria responded and told me she loved the photos. This time she invited me to eat ice-cream. Given her warm personality, I plan on taking Gloria's offer for ice-cream and some quality time with her pets.


Although some people might feel nervous to interact with strangers, meeting in public areas is a good option. I feel like these small interactions represent a city's true culture. I've only been here for three weeks, but I'm already excited to meet more people like Gloria.

CEA safety tip: mingle with locals and meet up in public areas; keep it fun and casual by never giving too much personal info; and always ask for your own drink never get it (even if for free) from the person you don’t know.

Elena P. is the Spring 2018 MOJO Photographer in Buenos Aires, Argentina. She is currently a Junior studying Media Production at Ithaca College.


Elena Piech is the Spring 2018 CEA MOJO Photographer in Buenos Aires, Argentina, and is currently studying at Ithaca College.
Leave a comment
Newest on top Oldest on top
Load more comments
Thank you for the comment! Your comment must be approved first