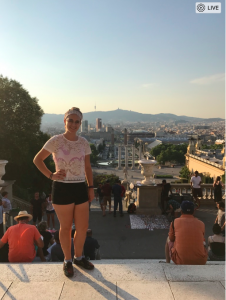 It was high school Spanish class that really made me intrigued with Spain and the rich culture it has to offer. We would learn so much about the country, its deep history and how diverse the language and people are. I knew one day that I would find my way to visit this wonderful country. My high school Spanish teacher, Senora DiMaggio is from Spain so hearing about her experiences and stories made me place it on the top of my list of places to visit.

Spanish was a language that came easily to me because of my fortunate background. I am of Puerto Rican and Cuban-Lebanese decent so I grew up with the culture, language and food of my people. Growing up, my grandmother used to always speak to me in Spanish, so I picked up on some words. When I grew up though, there was a time where I lost a little of my Spanish to prioritize English. Then, when I got to high school and began taking Spanish classes, I picked it right back up again. With that being said, I was not really nervous or shy to interact with locals in Spain. When I would talk to them the Spanish would flow easily like I never stopped speaking it.


They say when you are surrounded by the environment and culture, you assimilate easily and start living as the people there do. It was also interesting to hear the differences of dialect that was spoken in Spain regarding the pronunciation of words and the slang. All I heard all the time was “vale” before, during and after every sentence spoken amongst people that now I find myself using that when I speak Spanish with my family and friends here at home.

I chose Spain because as I stated before it intrigued me when I learned about its history and culture. I also know that I have some Spanish ancestry from my Dad’s side so I wanted to see for myself where these people came from and how they lived. When I was applying for my summer internship, I originally wanted to go to Madrid, but ended up going to Barcelona. I am so happy that I chose Barcelona for it’s cosmopolitan atmosphere, where modern meets ancient with such diversity, much like my heritage and background.


Through my adventures and interactions with locals, visiting museums, and participating in cultural activities, Barcelona made me feel like I was right at home and that I belonged. I did not feel like an outsider. I also found it extremely easy to navigate and travel throughout the city, like I have lived there all my life. I am not going to lie though and say there was not some form of culture shock, trust me there was, but these obstacles helped me to understand people a little bit better and what makes us so unique. It also brought light to how people have different lifestyles and value systems all throughout the world. It was no longer The United States for me, I now knew there was a bigger world out there.

The advice I would give to my fellow Latinx peers is to find a place to study or do an internship that makes you feel at home. It also has to be a place where it impacts you to learn more about themselves and where they come from. We are all so multicultural and diverse, it would be so amazing to find out where that diversity comes from. Studying abroad is a worthwhile experience and if you have the opportunity, you should not pass it up. It will help anyone learn more about themselves and their ever-growing potential.

Karime Diaz is an Alumni Ambassador. She did an internship abroad in Barcelona, Spain in the Summer of 2017 and is currently a senior at Kean University.