When in Dublin's Fair City 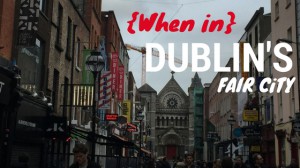 "In Dublin's fair city/where the girls are so pretty/I once met a girl named sweet Molly Malone/ and she wheeled her wheel barrow/ through the streets broad and narrow/singing cockles and mussles alive, alive, oh." -Molly Malone, Trad. Folk Song

In first few days of March, our CEA study abroad in Dublin group made its way to get a taste of Ireland's buzzing capital for a few days. After walking past landmarks like the General Post Office that hosted the 1916 Easter Rising against Britain,the Millennium Spire, an intrusive metal 390 foot spike prodding the skyline, and statues of revolutionaries and reformers along O'Connell Street, we came to one of Dublin's largest monuments: Croke Park. For those unacquainted with the GAA or Gaelic Athletic Association, Croke Park holds the much celebrated All-Ireland championships for county Gaelic football, hurling, and Camogie (female hurling) teams. Even if you're not one for sports, the history and sheer size of the park makes the tour worth your time: it's the third largest stadium in all of Europe!

After a walking tour through Temple Bar and prestigious Trinity College proved to be par for course.  Don't be deceived: Temple Bar isn't a bar. It's a whole district of bars and art collectives like the Irish Film Institute left from the days when Temple used to be Dublin's bohemian hub. It is now mostly bustling with tourists, especially come evening, but sure to scarf a meat pie or some coffee at the Saturday Farmers Market.


Inside the college, haunt of Beckett, Burke, Swift, Schrödinger, and Wilde,we gaped at the Book of Kells manuscript exhibit and  more than one of us was moved to tears by the impressive laddered shelves and the heady scent of old leather in the long room library, a vaulted chamber that inspired the design of Star War's Jedi archives.

We also paid a quick visit to some of Ireland's oldest preserved inhabitants at the National Museum, bog bodies, incredibly well-preserved sacrifice victims from up to 5,000 years ago. Almost all have their skin intact; some, a head of thick red hair, the only pigment remaining from years of soaking in an acidic peat bog.


The tour of the Guinness Storehouse mostly embodied endless lines milling in front of placards discussing the production process.  I wouldn't  suggest it as a must-see, but the tour is the only way to reach to the stunning 360 view of the city with pint in hand in Guinness' Gravity Skybar.

The next morning, a friend and I prepped ourselves for a Catholic mass at St. Patrick's Cathedral, the largest cathedral in the country. Come to find out, the service actually was Anglican! Usually one has to pay to see the 12th century church and its notable graves, but not if you're there to witness the service.

I'll add a shout out to quirky shop, Jam Art Prints and Grafton Street of Sheeran fame with its statue of my namesake, fishmonger Molly Malone.