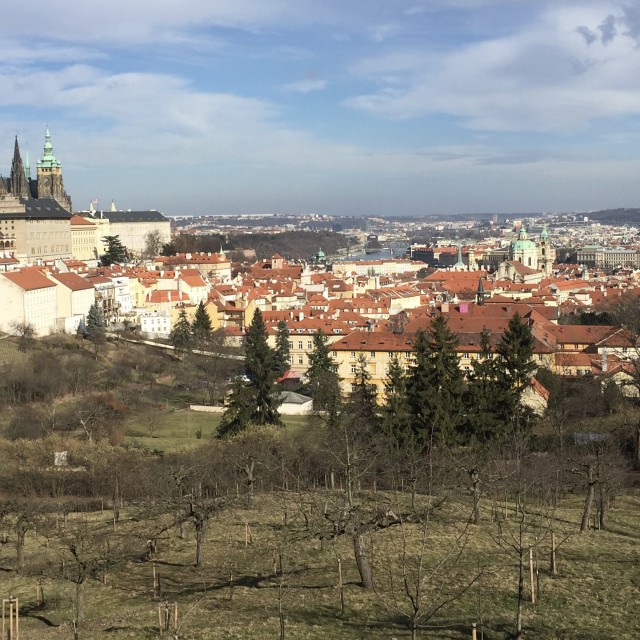 This week I went on the CEA excursion to the brewery tour. What I thought was going to be a quick afternoon walk around a brewery, ended up being so much more. We had a bit of a hike up to the Strahov Brewery, but our guide kept us entertained the entire way up. She took us by the American Embassy and the German Embassy to give us a short history lesson about the beautiful buildings.

The German Embassy even has a garden in the back with some interesting modern architecture by a famous Prague artist. As we continued our walk up the hill, we came across what I think is the best view in Prague. A path right before you arrive at the brewery gave an amazing view of a small vineyard along with being able to see pretty much the entire city of Prague. It's definitely a spot I'm going to come back to!


The added bonus of the excursion was that we got to tour the Strahov Monastery, which was once inhabited by Monks, prior to the Velvet Revolution. The libraries were decorated with intricate details of gold and had incredible architecture. The church hall was ginormous and equally as impressive. After we toured the Monastery, we headed over to the brewery for our tour. It was much smaller than I expected, but that is what I loved about it. Because they want to stay loyal to the same location and building, they do not have room to expand. This makes it only possible to purchase their beer at the actual brewery.

The vats where they brew the beer are huge! We got to see what raw malt looks like as they were brewing a new batch of pilsner. You can tell the company puts passion into their beer because they wait weeks, sometimes months, until a batch is fully ready to drink. A brewery tour wouldn’t be complete without trying some of their beer. First we were given a light beer and second they gave us a dark beer. They were both delicious and the atmosphere in the tasting room is so fun! I was with a group of other CEA students and I really enjoyed getting to talk to everyone I hadn’t met yet about where their favorite places in Prague have been. The Strahov Brewery is a hidden gem that I know I'll be coming back to throughout the semester! Cheers!

Lillian H. is the Spring 2017 MOJO Blogger in Prague, Czech Republic. She is currently a Junior studying Communications at University of Georgia
Lillian Huckabee in Prague, Czech Republic, and is currently studying at University of Georgia.
Leave a comment
Newest on top Oldest on top
Load more comments
Thank you for the comment! Your comment must be approved first