I would like to introduce some of the most (un)conventional Chilean cuisine.

First and foremost, Chileans love to eat mayo and avocados (Palta in Chile). They eat them with burgers, French fries, etc.

You’ll see them everywhere in the streets and in restaurants. Even the traditional “American” foods that we are accustomed to become Chileanized with these two ingredients.

The first uniquely Chilean twist to the hotdog is called, El Completo. Now, Completo is a foot long hotdog filled with mayo, avocados, and whatever else the owner desires.   It’s something that you’ve only seen in your dreams or nightmares.


Second, most famous for its massive size that even puts “everything is bigger in Texas” to shame is the Chilean hamburger, El Guaton. Once again, it contains the famous mayo, avocados, and pork meat along with three slices of bread from Patagonia (land of the giants).

The next item is one of Chile's must-eats. It’s called el lomito aleman. This sandwich came from German immigrants and does not lack the necessary ingredient to be Chilean: mayo, avocado, sliced pork and bread.

My final item I’d like to introduce is called Chorillana. It’s literally French fries with meat, grilled onions, eggs, cheese, and you guessed it--mayo on top. In Chile, eating fries with your hands was a foreign concept until McDonald's came in. So, fries generally are served thick with meat on top. 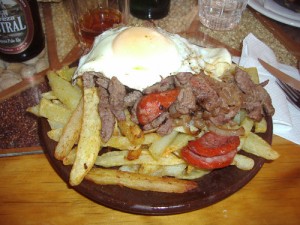 Even McDonald's, Burger King, and other fast food places carry burgers with avocado and mayo.

These are the most common foods that you will find on the streets in Chile.

Alex Chung is the CEA MOJO in Vina Del Mar, Chile. He is currently a Senior at the University of Michigan.