Earlier this month, CEA staff took students on an overnight excursion to Cesky Krumlov, a picturesque town located in the south of the Czech Republic and a two-and-a-half-hour bus ride from Prague. Known for its 13th-century castle that dominates the landscape as well as Gothic, Renaissance and Baroque architectural styles throughout, Cesky Krumlov offered a ton for us to see in a short time frame (and as much as I love Prague, it was definitely nice to get out of a busy city and explore a calmer village). We started off the weekend with a walking tour of the city, and our guide informed us right away that the town was once dubbed “the Venice of the Czech Republic” due to it being split by the beautiful Vltava River, pictured above. It’s also worth mentioning that Cesky Krumlov remained untouched despite the two world wars that damaged other parts of central Europe. 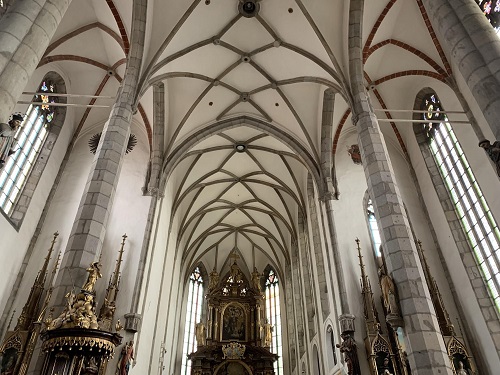 We then walked around the main neighborhood of Cesky Krumlov, visiting the Church of St. Vitus where supposed “vampire” princess Eleonore von Schwarzenberg was buried (she was apparently sensitive to the sun and drank wolves’ blood -- very strange indeed) and taking in the views of this fairytale town and its winding streets. It wasn’t too crowded, so we all got a good spot on an overlooking bridge and took plenty of pictures. A lunch break was next, and since my group and I worked up a hearty appetite during the tour, we decided on Italian restaurant and ordered delicious pizza and pasta. Below is my pesto pasta that I devoured.

After our lunch we met back up with everyone and embarked on a private, guided tour of Cesky Krumlov Castle, built in the 13th century by the powerful Rosenburg family. We saw their lavish dining, living, waiting and bed rooms, beautiful paintings as well as two bear skins. As a UNESCO world heritage site, it’s absolutely worth a visit if you’re visiting the Czech Republic.

Since we were struck with some bad weather on the second day of the trip, we did not go hiking as planned and instead headed straight for lunch and a visit Hussite Museum and Underground Tunnels in Tabor, a town on the way back to Prague. We got to put on hard hats and venture into these labyrinths of tunnels, which originated in the 15th century, when people dug them for storage and shelter in case of attacks. Then, it was back on the bus and back to Prague!

Thanks to the CEA staff for planning this short and sweet trip — I loved the guided tours and learning more about the history and culture of Cesky Krumlov.

Caley Griebenow is the Fall 2019 CEA MOJO Blogger in Prague, Czech Republic, and is currently studying at University of Iowa.
Leave a comment
Newest on top Oldest on top
Load more comments
Thank you for the comment! Your comment must be approved first