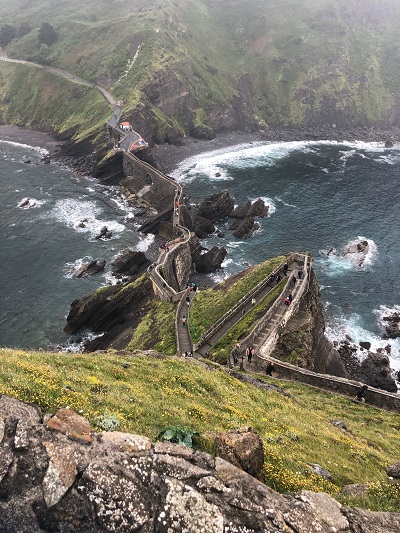 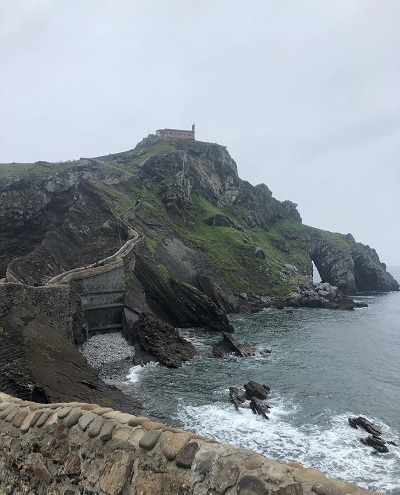 A few weeks ago, I posted a blog about my time in San Sebastián, Spain, and how the often underrated Northern region absolutely captured my heart. After that was published, I decided it was only fair to anyone who read it that I share a truly exquisite day trip from the city. San Juan de Gaztelugatxe, often better known as the filming location of “Dragonstone” from "Game of Thrones," was genuinely the experience of a lifetime. My boyfriend, Roi (who happens to be a huge "Game of Thrones" nerd), and I were fascinated with the history of the 1,500-year-old spot that has housed various churches dedicated to John the Baptist. Originally, 365 steps led to the island chapel to represent each day of the year. With deterioration and necessary renovations, that number has decreased to 241, but the magic of the place remains. San Juan de Gaztelugatxe served as a convent, has suffered military attacks, and its caves are rumored to have held Basque women accused of sorcery during the Spanish Inquisition. Regardless of your interest in history, or "Game of Thrones," this place is a must-see.

It is important to note that our main prerogative was to experience the most beautiful places while spending very little money. This is not always an easy feat, but by utilizing local transportation, we were able to achieve it. Using Google Maps and reading travel blogs, we plotted our trek the night before. Early in the morning -- well, early for Spain (9 a.m.) -- we caught a bus from the San Sebastián/Donostia station and rode an hour to Bilbao. After a short walk around the city (and a much-needed stop for coffee), we boarded our second bus to the town of Bakio. This incredibly scenic ride unfortunately revealed the weather we did not want to experience; the sky became grayer and the raindrops on the windows more prevalent. When we arrived at the end of the line, our bus driver explained that the commonly used trail to San Juan de Gaztelugatxe was too peligroso to walk with all the recent rain and mud, and we would have to walk the long, narrow road through the surrounding farm fields. Since that day, I have expressed my gratitude to that kind bus driver time and time again, for both keeping our safety in mind and pointing us in the most charming and enjoyable direction. On our hilly, rainy, windy walk we truly felt like we had a glimpse into the rural Spanish landscape. Horses and cows greeted us at each turn, while bright yellow wildflowers dotted the path. The green was a green like no other, and the rain was proving to be refreshing. 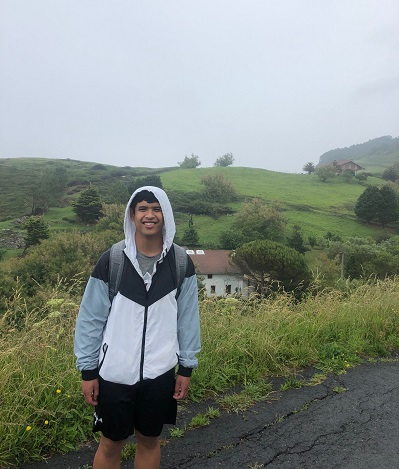 Upon reaching a point where the water was visible, we got our first glimpse of “Dragonstone.” We picked up the pace, eager to experience the island firsthand. The rest of the hike was downhill and populated with multiple tourists who had driven and bypassed our jaunt through the farms. There was a restaurant and a small stand where a kind man with a thick Basque accent sold Coca-Cola. Walking down the hill, we continually stopped to take pictures of the miraculous landmark.

The base of the 241 steps was quite daunting. The ascent, which has been done by countless people over the last two centuries, has significant cultural importance. It truly felt like we had entered a fantasy realm. We began climbing, Roi began quietly humming the "Game of Thrones" theme song, and I rolled my eyes the whole way up. The rainy day had created a gray sky, but the water retained a blue tint. That, along with the lush green grass and the bright yellow wildflowers created an incredibly colorful landscape, despite the lack of sun. Reaching the top, quite out of breath, we both declared we had never been anywhere as amazing. During our reading the day before, we learned about the ancient fisherman’s tradition of ringing the bell attached to the church three times for good luck, which we did. The charming little church provided some protection from the rain, and we ate our packed picnic lunches under an awning by the infamous bell. After spending about an hour circling the building and admiring the sea, we said goodbye to San Juan de Gaztelugatxe and began our descent. 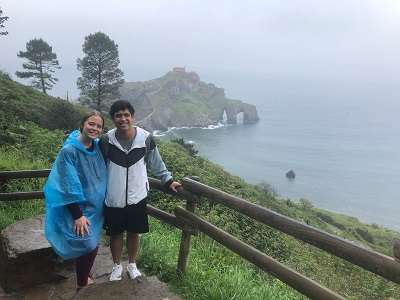 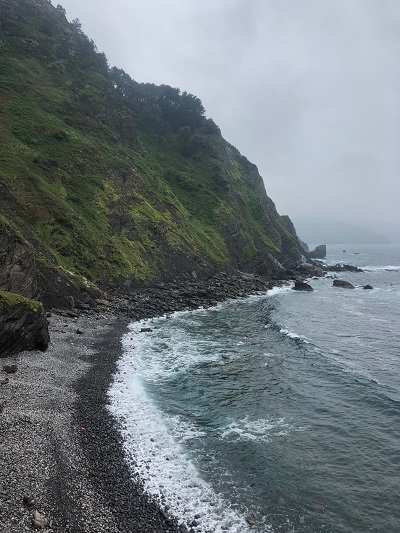 During the Spanish Civil War, the Basque region in particular was brutally bombed. Small, hilly towns like Bakio were strongholds for the republican resistance that strove to obtain freedom, suffrage, and democracy. Basque men and women lived in constant fear of air raids and horrific brutalities. The collective trauma of Northern Spain has created a population that is resilient and strong with a belief in the importance of history.

San Juan de Gaztelugatxe reminded me of this mentality, with its ability to withstand the tumultuous sea, the erosion of time, and one of the most brutal civil wars in human history. It was grand yet humble, simple yet beautiful. I am not exaggerating when I say it was the most incredible place I have ever visited. Whether you want to hike, experience nature, visit a religious site, respectfully participate in the local culture, or you are simply a nerd who loves "Game of Thrones," San Juan de Gaztelugatxe deserves a coveted position on your travel bucket list.

Lily Anderson is a CEA Alumni Ambassador who studied in Seville, Spain, during the Spring 2019 semester. She is currently a student at the University of Alabama.