October 20, 2017
by CEA Content Creator
SHARE SHARE
Ice Cream is a big deal in Buenos Aires. Maybe because of the warm climate, maybe because of the Italian influence on the cuisine. Regardless of why, ice cream shops are plentiful with a variety of flavors that you’d never find in the states. I love ice cream but am lactose intolerant, so I figured writing a blog on ice cream would give me an excuse to put my lactose pills to use! 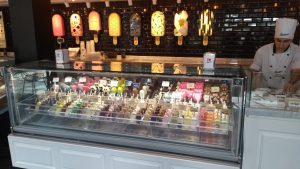 The Recoleta Lucciano’s store is big and beautiful. Their range of flavors includes everything you could imagine other than vanilla, and each one I tried was delicious. Plus, if you’re not in the mood for cream, you can still enjoy an instagrammable ice pop.

I first tried the mandarina and the flan casero before being blown away by the banana split. Lucciano’s perfectly captured realistic banana flavor with just the right blend of additional sweetness and chocolate. My mind was made up the moment it hit my tongue, and then I was told I could choose two more flavors for my cup, which sent me into a panic.

I settled on the dulce de leche con brownies, which was good, but a little thick for my taste.

My one regret is not trying more flavors to pair with the banana split; the Tiramisu and Kinder both looked amazing as well and might have been complimentary. 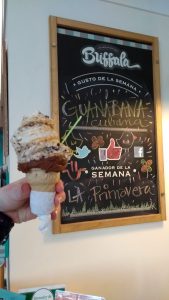 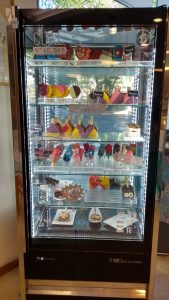 I walk by Buffala’s every day on the way home from school and have been eyeing the ice cream pops since the beginning. I held off from going as long as possible, because now I know how good it is, it’s too tempting!

The only flavor I tried was Choco Naranja, and it was so good that I almost forgot to take my lactose pills. I combined it with Banana Split, and the flavor combo did not disappoint. I still don’t understand how helanderias here make their banana split ice cream taste like fresh bananas, but it’s magical, and the choco naranja perfectly balanced the chocolate and orange flavors so neither overpowered the other. Both ice creams were thicker than what you’d find in the states though.


Búffalas also has ice cream pastries, including an ice cream version of an alfajor, a cookie sandwich typically filled with dulce de leche, and briogelato, a sweet warmed bread filled with ice cream and then covered in powdered sugar and a drizzle of sauce. 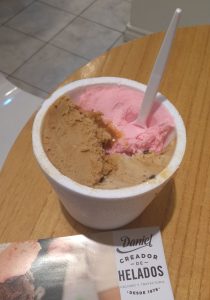 Every time I try the banana split ice cream, I think it’s the strongest, most realistic banana flavor I’ve ever tasted. Daniel’s was also set apart by the prominence of the chocolate bits mixed in: there seemed to be more of them and they were either a dark or semisweet chocolate, so the flavor lingered. The cappuccino al carmelo was really good if you like coffee ice cream. But, the coffee overpowered the caramel flavor. While I enjoyed it, it wasn’t really what I was hoping for. My favorite here was the cereza, which was a milder maraschino cherry flavor, with bits of maraschino cherries mixed in. It was nice and sweet, but not overpowering, which is a problem I think with actual maraschino cherries.

Daniels also had the cheapest ice cream of all the shops I visited. 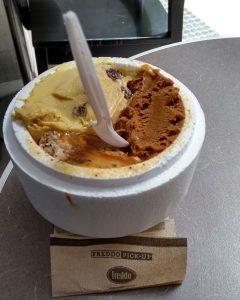 Of all the banana split flavored ice cream I’ve tried, this was the only one where I thought, “this is banana flavored ice cream” and not “OMG, they managed to make fresh bananas mimic the texture of ice cream perfectly.” Freddo’s banana split did have the most dulce de leche sauce though, and the chocolate bits were evenly distributed, so overall it was good, but not mindblowing.

Sambayón is an Italian dessert made of egg yolks, sugar and wine. The Sambayón Italiano flavored ice cream also has rum soaked raisins mixed in. My first thought as I tried a bite was that you can really taste the wine, and when I had a second bite with a raisin, I really tasted that rum too. I’m not sure if I liked it or no, but it’s definitely a unique flavor. The Dulce de Leche Vauquita is my favorite dulce ice cream that I’ve had so far. The texture was perfectly smooth and soft, and it tasted just like Vauquita which is a tablet made of dulce de leche.

Freddo’s had the most expensive ice cream of the shops I visited though, and I don’t think it had the best ice cream. However it’s a common chain, so easy to find and there’s a shop a few blocks from the CEA Study Center.

The first thing I noticed looking at Valence’s rotating ice cream display is that they had a vegan chocolate!!! This is the first time I’ve seen vegan ice cream in Argentina, and I was thrilled. I tried it, and it was amazing but super rich as vegan chocolate ice cream tends to be, and I was eating this ice cream at 11:30 in the morning. 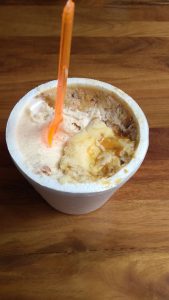 The flavors I opted for instead did not disappoint though. The tarta de manzana tasted like a milder version of apple cider, and even had chunks of seasoned apples in it. It was a perfect taste of fall. The banana split was what I’ve come to expect of banana split: mind-blowingly magical because it tastes exactly like real banana. And the crème brûlée perfectly captured my favorite part of crème brûlée, the caramelized sugar crust. Not only did the ice cream taste like that first bite of crème brûlée, it also had pieces of the crust mixed in, adding a nice crunch.

Another strong pro in favor of Valence is that it’s half café, half ice cream shop, so it opens at 9:00 a.m., in case your in the mood for ice cream for breakfast.

Throughout my entire ice cream sampling experience, I continued to struggle with the idea that at some point I’d have to stop going to new places and write it all up. There are still many shops that I haven’t had a chance to try yet, but I’m happy with my final stop. If you get the chance to be in a study abroad program in Buenos Aires, eat all the ice cream; you won’t regret it.

Quinn K. is the Fall 2017 CEA MOJO Blogger in Buenos Aires, Argentina. She is currently a Junior studying Professional Writing at Champlain College.