October 19, 2017
by CEA Content Creator
SHARE SHARE
Over the course of the semester, CEA offers many excursions and cultural activities to help students get a better understanding of Czech culture and history! Prague and the Czech Republic has a deep and rich history like many other European cities as it was once part of the Habsburg Empire and underwent Communism. As an On-Site Ambassador in Prague this fall, I have been able to re-experience some of my favorite excursions that I went on as a student and experience new ones that have been added since my studies ended, learning more about my home city. 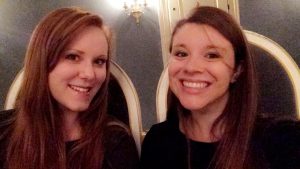 The first cultural activity I went on was to the Opera to see Don Giovanni. In the states, I haven’t been to any operas so I wanted to take advantage of this opportunity to not only see an opera in Europe but to see an opera in the very city where it made its debut. Mozart himself premiered Don Giovanni in Prague in 1787- so it was only fitting to see it in its “home” city, don’t you think? Don Giovanni is a story about a bachelor who uses his charm to take advantage of others until he faces something that he can’t outwit or out charm.

Next, I went to Strahov Monastery and Brewery Tour. There, I walked the hill that overlooks Prague with breathtaking views (quite literally) and saw the beauty of the libraries at Strahov once again. One interesting thing about the Monastery is that all the Monks that were at Strahov were able to perform services; this wasn't always the case at other churches/monasteries. During that time much of Prague’s water was polluted and you weren’t able to drink it without becoming ill; which led to the monks brewing their own beer. Today, the Strahov Brewery still exists and you can taste the brew the monks made (with modern technology). 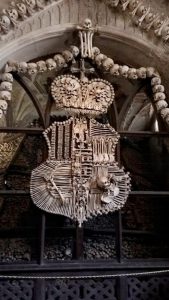 Following the Monastery, it was off to Kutna Hora; a small mining town about an hour outside of Prague. Known for being “Little Prague” Kutna Hora was once the center of Silver Mining. Much like Prague, they have a Charles Bridge and the beautiful Gothic Cathedral of St. Barbara. St. Barbara was the Saint that the miners would pray to before heading into the mines to mine for silver. Only 3km away from Kutna Hora lays the Sedlec Ossuary or most famously known as the Bone Church. There the inside of the church is decorated entirely with human bones (interesting/weird I know but suuuuper cool!). Many of the human remains come from those who died during the black plague. Seeing it again was like seeing it for the first time all over again, you look at the chandelier and the guild and you are blown away by the magnificence of how they were able to use human bones to decorate the inside of the church.


Prague’s most famous author is none other than Franz Kafka. Remember reading about a man who wakes up as a bug? Yup… that’s him! Before the Intro to Franz Kafka, I knew he was a Jew living in Prague who spoke German. During that time, if you spoke German in the region you were considered to be well off or very prominent in society (thank you Jewish Experience in Central Europe and Jewish Prague class for this info!) I also remembered learning that he wrote obscured short stories and books that sometimes didn’t make sense. 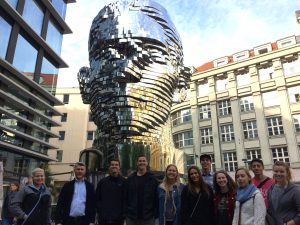 Since the Intro to Kafka tour, led by our Center Director Richard Stock; I have learned that Kafka was born during the Habsburg Empire and died when Czechoslovakia became a nation. He spent the majority of his life living and working in the heart of old town square, his biggest move was moving to Prague Castle with his sister and living on Golden Lane. As Kafka was dying he told a friend that he wished all of his unpublished work be burned. This is why many of his writings that were published after his death don’t make sense, they weren’t exactly the way he wanted them to be. Lastly, with the exception of Kafka and authors like James Joyce who was an Irish author from Dublin, not many authors are tied to a specific city like these two are. Kafka died was he was 42 from tuberculosis. He didn’t become famous until after he died and his work began to be translated. 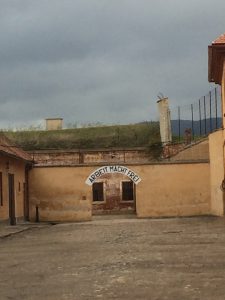 Next, Terezín. This place holds a special place in my heart. Being a Jew and going to a concentration camp is never an easy feeling or thing to do. You can still feel this aura that is there, one that will never fade nor go away no matter how much time has passed. The first time I went there was with my Jewish Prague and Jewish Experience in Central Europe class. There we learned that Terezín was perceived to be rehabilitation camp for Jews, where they would learn how to be reintroduced into society as a proper citizen, but later the world would know that this wasn’t the case. In the Pinkas Synagogue, you can find drawings from the children who were at Terezín, along with the names of those who perished in the war.

Terezín located about an hour outside of Prague, was built by Joseph II as an army fortress and was named after Maria Theresa, his mother. You may know his sister- Marie Antoinette who died during the French Revolution. After it was deemed unfit to be a fortress it turned into a prison that the Habsburgs used. It’s most famous prisoner, I guess you could say, was Princip Gavrilo from Bosnia who assassinated Archduke Franz Ferdinand and his wife Sophie, starting World War I. Eventually Terezín became a concentration camp and a ghetto, the Red Cross came to evaluate the camp to see what the conditions were like, but the Nazi’s knew of this visit and they had weeks to prepare.

Being in Terezín, in an actual concentration camp puts everything that we have learned about the atrocities of World War II into perspective. Today, with there being so much hate in the world, these places remind us that it wasn’t too long ago that many people died simply because they were different. Being in the U.S. we are physically removed from the history of what happened in Europe during the War and Terezín is one of many reminders that it’s important to never forget and to learn from the past.

Lastly, we finished the day at Lidice, a small town about 26 km from Prague. Hitler's right-hand man,  Reinhard Heydrich was killed in Prague by three parachuters from Czechoslovakia. As payback for the death of Heydrich, Hitler chose three towns to destroy, and Lidice was one of them. The women and children were taken to concentration camps, those children who had Aryan features were taken to Germany for Germanification. Lidice was completely destroyed and today there is a small museum and memorial for the men, women, and children who died there.


The final activity I went too was the HC Sparta hockey game. This is by far my favorite activity here in Prague. I am a huge hockey fan back home (Go SHARKS!) so being able to go to a hockey game in the Czech Republic is truly an amazing experience. Hockey games in Europe differ than those in the U.S. as fans cheer more vigorously than Americans do; they even have drums to cheer on the home team! There is always a cheer going on (even in Czech, you have a good understanding of what is going on!) and overall just very interactive! Being able to see one of my favorite sports in one of my favorite cities is an amazing experience especially when the home team wins!

These cultural activities and excursions helped give students and myself background and insight into Czech culture and history. Being back as an On-Site Ambassador in Prague has been an amazing opportunity and I am so happy that I have been able to participate in these excursions again during my time here and learn more about my favorite city and the Czech Republic!

Noa B. is a CEA On-Site Ambassador in Prague. She studied Communications at University of Colorado – Denver and studied abroad in Prague with CEA in Fall 2015. If you’d like to learn more about the ambassador program, here is more information.