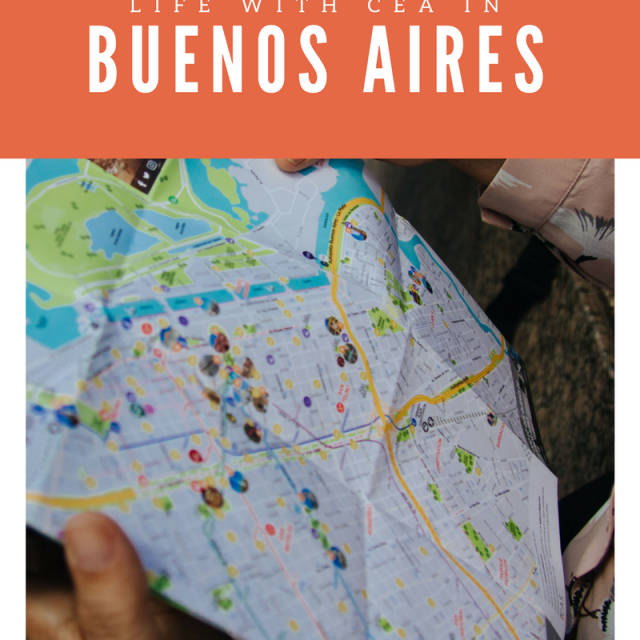 Matias is a CEA Student and Academic Advisor in Buenos Aires. He was born there and holds an undergraduate degrees in Political Science and Political Science Teaching, along with a Ph.D in Social Sciences, from the University of Buenos Aires. Matias completed an internship in Washington D.C. and has traveled to many European, Middle Eastern, North American, and South American cities.

What was your favorite part about growing up in Buenos Aires?

What I love most about Buenos Aires is that it’s a big city, so it has lots of things to offer for different tastes. What I like the most is going to theater performances, and we have so many theaters here, both in the professional and amateur circuits. I also like to go to the cinema, a variety of museums, and I always attend the annual jazz festival. They organize concerts throughout the city and in different settings, sometimes, for example, in the middle of a park.

I also like to go walking or biking in our parks. We have a very beautiful park called Rosedal, which translates to the “Rose Garden.” It has an island and very beautiful rose gardens, of course.

I also like to go out. Buenos Aires, like any major city, has different options. Regarding food, what I like the most is the city's strong pizza tradition, which is due to our Italian heritage.

Also, due to immigration, we have many gelato stores, and one of my favorites is called Rapa Nui. It was first established in Patagonia and then came to Buenos Aires, which is why it has a Patagonian name. All the flavors there are just amazing, incredible. The gelato is very creamy and authentic, so every time you go there, it’s just blissful.

We have a special kind of pastry called alfajor de cacao, and there is a brand called Cafes Havanna. I like the alfajor that has pure cocoa on it. It’s just impossible to resist.

How prevalent are the cultures of the separate immigrant and ethnic groups in Buenos Aires?

There is in general a sense of pride in Argentine culture. Argentines really like Argentine music, Argentine cinema, Argentine theater, of course, Argentine food, etc. So in that regard, there is a very strong feeling of pride about our cultural heritage and cultural productions. Within that feeling, there are of course different kinds of tribes. So you might have different music styles or different theater traditions, both mainstream or off the main theaters. In music, you have Argentine metal, Argentine jazz (which is amazing), and of course, you can include the Argentine cumbia, which is the popular music/dancing style that came from Colombia but was adapted here in Buenos Aires and throughout  Argentina. Cumbia has different local elements.

There are also differences between Argentine provinces. We have 24 provinces, so there is another dancing tune from the middle of the country, the Cordoba province, which is called Guateque. In that regard, every province and some of the neighborhoods in the cities as well, they have different traditions, and they are very proud of defending and keeping them.

In Argentina, there is also a strong Jewish community, I think the largest in Latin America, and we are one of the top ten Jewish communities in all the world.

With Argentina being so large, does it feel very united or separated?

Unfortunately so, it’s very separated. Of course we share, for example TV shows and music, but generally, different regions have their own traditions. So Buenos Aires has the most cosmopolitan vibe, it has lots of things in common with different major cities of the world. Whereas, for example, the Northwest, Salta and Jujuy provinces have the most in common with the rest of Latin America: they eat tamales and they even still have their native languages.

Depending on the region, you have different foods. In the south, mutton (sheep meat) is very common. In Buenos Aires, you will eat a lot of beef. In the North East, we have influences from the jungles, and because of that, there are more exotic dishes like surubi, a very thick fish which is special in the Northeastern provinces.

What is a commonly unknown fact about Buenos Aires?

I think most of our students still don’t know about the many things BA has to offer. Of course, when they come here, they have one of their greatest surprises they face when studying abroad, because they see that there are so many things to do in the city. I would like them to research more before coming, so they know what to do in advance and start living the BA experience as soon as they step off the plane.

What is an important part of the history/culture that you find students aren’t aware of before they arrive?

Getting around the city and country, students will need to use cash much more than in the States. Argentina is very dependent on cash. Of course, credit cards are accepted in many regular stores, restaurants, etc. But, for example, in taxis, you can only pay with cash, and many other stores, like drugstores, you can only pay in cash. So I advise students to have cash handy at all times.

We also advise them to mind their belongings more here. It is a different social reality, and we want them to have the best possible experience.

If they have the time and will, they should explore both the country and the region. Argentina is the 8th largest country on earth, and South America is even bigger, so we generally advise students to know their schedule, to read our program guide when coming to BA, and then to take advantage of the weekends to explore the country and the region. There are so many amazing places to explore, like Rio de Janeiro, Brazil; Machu Pichu, Peru; or the glaciers here in the south.

What appears to be the most challenging aspect of life in Buenos Aires for students to adjust to, and how do they overcome the difficulty?

Here in Argentina, we follow the French education tradition. By the end of the 19th and the early 20th centuries, we always looked up to France as an academic example. So our course packets or reading materials tend to be longer than in the States. And our questions tend to follow the more reflexive French model. We may have more open questions compared to the States. We always tell students when they come that of course the instructors will tell you what goes into the exam and give out mock questions or mock tests to prepare you, but they still find the criteria a little bit shocking. Nevertheless, students tend to appreciate our approach by the end.