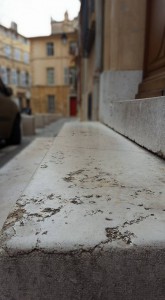 You know the ones who always seem to know what’s going on? They don’t need to screenshot Google Maps before leaving or ask for directions in between blank stares. They already know what they’re looking for, and they know where to find it. They see and they know.

This morning, I met some sweet souls who embody what it means to know so, so well. Before coming to Aix-en-Provence, I didn’t spend much time thinking about volunteering while I would be here — I was pretty well occupied between French, schoolwork, researching weekend trips, stuffing too much in my suitcase (and reluctantly leaving behind some of my Cliff bars and ‘Food & Wine’ magazines in a valiant effort to get my suitcase under 50lbs.), and the food (because how can you not think about French food, am I right ???). I’m figuring out that what I really want most for myself while I’m here is to live like a local. I’m going to resist the urge to look away from the moments that twist my heart into a hurt ball and go towards them instead. The best way to do this? Immerse yourself in the local culture with contextual experiences like volunteering.


So at 8:30am, I showed up at a church only a few minutes from the center of town (y’all know I followed my google map image the whole way there) where I met the other volunteers. Each Sunday, people at Paroisse Saint-Jean-de-Malte gather to set up tents with croissants, coffee, and tea to serve breakfast to the homeless people of Aix. It was my first time, and everyone was very friendly and patient with my less-than-stellar French. After we set everything up, three other volunteers and I went out with a crate filled with croissants, teabags, and a large carafe of hot water to began walking the mostly deserted streets of Aix in the morning.


Walking with my breakfast companions was such a cool experience because even though we more-or-less took random paths around the city, I could tell they knew these routes like the backs of their hands. They’d greet the men and women we served like I’d greet an old friend. Some weren’t in their usual spots (although their belongings were); one man was sound asleep. Almost all of them have dogs — we met two men out walking theirs; one of them fed a few pieces of croissant to his puppy. When we asked if he’d like another one for his dog, he said that we should save them for the other people while continuing to feed little bits to his dog. If we all treated each other the way these men treat their dogs, this’d be a better world. I am very willing to bet it’s true.

Loving people through food and conversation; an old idea seen under a new light here in Aix. It’s somewhat of a traveling Sunday café, one where the server knows whether the woman sitting at the end of rue de la Masse wants one or two sugar cubes in her tea because he meets her every Sunday and pays attention. He does more than see her, he knows her in a way that not many people do. I loved being a part of this Sunday operation because it meets people exactly where they are. There’s no need to shine up your Sunday shoes or walk through the rain; these volunteers at Paroisse Saint-Jean-de-Malte extend their own breakfast-filled hands, and more importantly, their hearts. I am honored to be with them, if only for a short while.

Sarah S. is the Spring 2017 MOJO Blogger in Aix-en-Provence, France. She is currently a Sophomore studying English Non Fiction Writing & French at University of Pittsburgh.