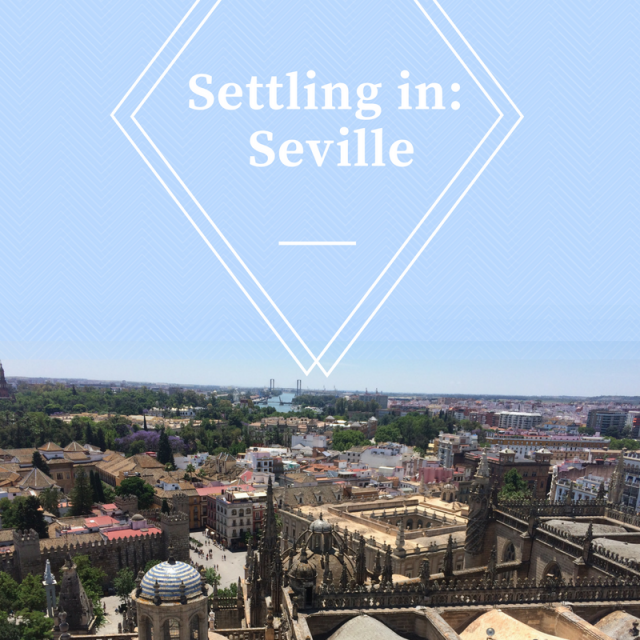 Last semester was a whirlwind, especially towards the end; with finals and moving out of my house that I had lived in for over a year and half, it all must have left me in a haze. I had to put everything I wasn’t taking with me to Spain away in boxes, I decided to add more stress to an already taxing situation by committing to only bring a carry-on sized suitcase with me for my semester in Seville and a total of six months abroad. As a result, I didn’t really feel any of the nerves one would usually feel when they’re about to depart for a half a year abroad. The day of my departure kind of crept up on me. It didn’t really hit me until I was already in the airport in Madrid. My flight was late and I missed my connection and as nice as Barajas is, I decided to take the train to Seville rather than wait for 10 hours for the next flight - which was quite the journey. (If someone tells you the train station is close to the airport, know that it’s a lie) I guess I was too busy to feel nervous.

All that aside I was excited to get to my apartment in Seville, which luckily was a short walk from the train station. I chose an apartment for the freedom to make the food I want to and to be able to eat out as much as I pleased without feeling obligated to be home, like you might feel in a residencia, or a home-stay. I studied with CEA over the summer in Granada in a residencia, which was a great experience, but if you’re an independent person like me, an apartment is probably a better option.

Somehow in my post-22-hour-travel stupor, I was able to make it to a nearby supermercado and make myself a decent first meal. As you would expect the products at the store are much different than in the states, they’re also much more inexpensive.


Cooking with new ingredients has definitely been somewhat of a challenge, but it encourages me to cook more Spanish foods like Espinacas con Garbanzos - which one serving of probably cost me < .70 € to make.


Another benefit of staying in an apartment is that I am able to do my own laundry. Which is also done a bit differently here. My building has a dryer, but it is very rare for a Spanish household to actually have one, let alone use one. The weather here in Seville is usually nice and sunny so hanging my clothes is actually a nice excuse to soak up a little sun. I have also been enjoying my time inside the apartment. I got lucky with an updated modern place.

In an apartment housing option I have the freedom to leave and explore the city as I wish without time constraints or obligations. There is so much to see in a beautiful city like Seville.

My first weeks here have been great and I can’t wait to know more of the city as time passes.

Caitlin M. is the Spring 2017 MOJO Blogger in Seville, Spain. She is currently a Junior studying Spanish & European Studies at Humboldt State University.

Caitlin McCollum-Martinez is the Spring 2017 CEA MOJO Blogger in Seville, Spain in Seville, Spain, and is currently studying at Humboldt State.
Leave a comment
Newest on top Oldest on top
Load more comments
Thank you for the comment! Your comment must be approved first