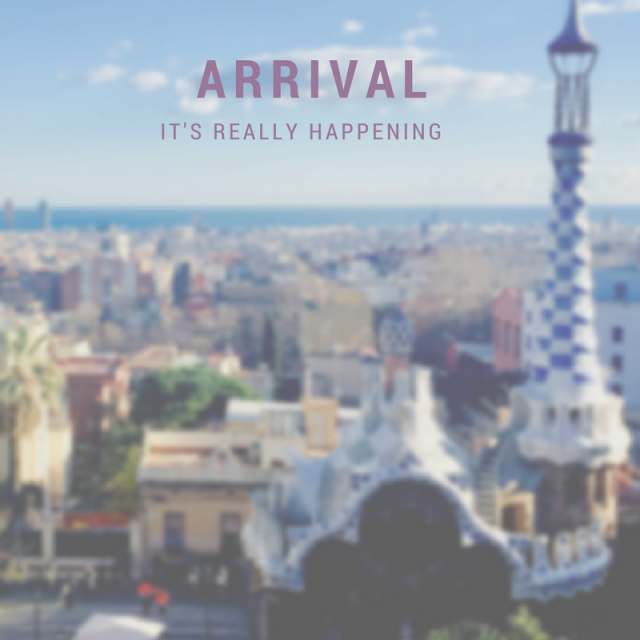 My initial emotions toward leaving for Spain were somewhat balanced out. The mix of extreme excitement for the months to come and stress over getting everything ready left me feeling numb. The first few days I spent in Barcelona presented me with similar contrasts. I was conflicted with both magical encounters and severe discomfort, sometimes within the same ten minutes. This arrival stage overwhelmed me with the combination of excitement and adjustments.

The moment I left the Barcelona airport, the reality of my situation began to sink in. As I looked out the window of my taxi at the unfamiliar mountains, buildings, and Spanish billboards, it hit me that this experience I had been anticipating for years was finally happening. The landscape around me was beautiful. You don't need a tour bus to see the striking mountains and beaches or an art degree to appreciate the incredible architecture throughout the city. But as I recognized the enchantment of my new home I also began to encounter my first cultural discomforts.

Beginning with that cab ride, I learned that the language barrier was more of an issue than I anticipated. I took Spanish throughout middle school and high school, and even took one semester in college because I considered it as a minor. I figured that I wouldn't  have a problem and that most people spoke English anyway. When trying to ask my cab driver some questions about my apartment, however, I realized that this was not the case and that my Spanish was rustier than expected. I also learned that the main language spoken by locals in Barcelona is Catalan. Listening to strangers talk on the street is completely unfamiliar and signs and menus are often unrecognizable to me. Luckily, the people in Barcelona all speak Spanish as well, and many do speak a little bit of English.

In addition to language, getting around the city seemed daunting at first. I grew up in the suburbs and have never experienced much public transportation. I have to take a metro to get to my classes from my apartment, and learning to use it made me a little nervous. I didn't know how to navigate the different lines, which stops to use, or if it was safe to travel on my own. I learned after just a couple days, however, that it is actually a very easy system and I now have no problem taking it by myself during the day.

These little obstacles were common for me the first few days, and after two weeks I am still facing new challenges. The moment I saw my beautiful apartment and met my roommates, however, I knew I was going to be fine. We had so much fun being tourists that first weekend, that I quickly discovered the benefits are going to outweigh any discomfort during this experience. Now that I have arrived and feel more settled, I just can't believe its really happening.

Julia D. is the Spring 2017 MOJO Blogger in Barcelona, Spain. She is currently a Junior studying Communications and Film at the University of Michigan.


Julia Dixon is the Spring 2017 CEA MOJO Blogger in Barcelona, Spain in Barcelona, Spain, and is currently studying at University of Michigan.
Leave a comment
Newest on top Oldest on top
Load more comments
Thank you for the comment! Your comment must be approved first