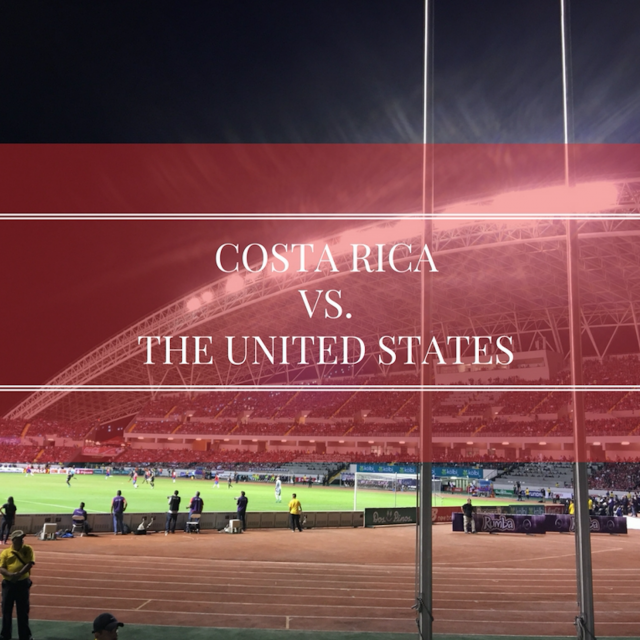 It's autumn, the leaves have turned shades of red and brown; some have already shed from the trees. The mountains of New England are a beautiful sight for the highway traveler and the air is crisp. Starbucks cups have gone red and pumpkin spice is king once again. A cup of hot chocolate warms my hand as I sit in the bleachers. The “Boys of Fall” take the field. Ah, but I am not in New England this year, I don’t have a chilly red nose or a snuggly sweater. This year Starbucks coffee couldn’t even compare. This year, the “Boys of Fall” are not hidden under shoulder pads and helmets; this year, they play futbol not football. Something new for November. 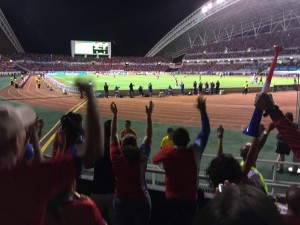 After Costa Rica’s national soccer team defeated Panama in a World Cup qualifying game back in earier this year, news spread fast that the next game would be against the United States. For US study abroad students, this may have been the greatest news ever. Our CEA faculty was not at all blind to this excitement and, with little hesitation, the cultural immersion event for the month of November was decided: the Costa Rica vs. USA soccer match.

Welcome to Costa Rica, Mom & Dad! I am extremely blessed this year, not only to be in Costa Rica or to have to opportunity to go to this soccer match, but also that I am able to share this time with my parents. For me, as a little girl who grew up with her Dad as her coach and her Mom on the sidelines ready to hand out half-time oranges, this was an amazing coincidence. With the help of CEA staff in San José, I was able to score my parents some tickets as well and share the experience with them.


Going into the game, I was a bit nervous to be both a Costa Rica fan and, naturally, a USA fan. Outside of the US, countries take soccer to the next level and sometimes that can mean overly-rowdy crowds. I arrived at the game wearing a Costa Rica flag and blended in with the massive crowd, rooting for both teams throughout. Costa Rica and the USA having the same national colors, so it definitely made it easy to be a fan of both sides. The announcer was hard to understand both because of noise and the language barrier, so when the teams first came out, both wearing red, I had no idea who was whom. The sea of red Costa Rica fans made it quite clear with their tremendous cheering.

I was proud, when the United States national anthem came on, both to sing and feel a little bit of home while abroad. That being said, I have never seen something so patriotic and beautiful as the Costa Rican people standing as a single body and singing their anthem. With such a rowdy crowd, I was in awe of how the start of the song brought these people first into utter silence. What followed, the entire stadium singing the anthem together, was a shockingly beautiful experience. I have seen many beautiful sights throughout my months in Costa Rica, but I have never felt such an intense feeling as I did during this national anthem. Ole, Ole, Ole, Ole, TICO, TICO!!!! 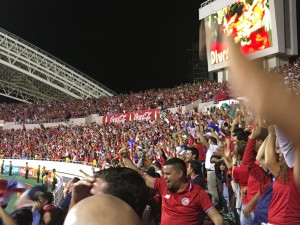 Going to this soccer game was one of the best cultural experiences I have had during this semester abroad. While I love soccer, I have to admit that I, like the majority of the US, don’t pay nearly as much attention to the game as other nations across the world. For Costa Rica, soccer is everything and there is no other sport that could compare. Being at the game made this message entirely clear. The crowd itself was a show to watch. It moved as if it was a single body. When Costa Rica scored, and they did, over and over again, the crowd went wild. To put it into terms we can all understand, it was lit. Costa Rica won the game 4-0 and, for me, the passion of the fans was even more impressive than the game itself.

Amanda V. is the Fall 2016 CEA MOJO in San José, Costa Rica. She is currently a junior studying to be a Physician Assistant  at Philadelphia University


Amanda Vecchio is the Fall 2016 CEA MOJO Blogger in San Jose, Costa Rica, and is currently studying at Philadelphia University.
Leave a comment
Newest on top Oldest on top
Load more comments
Thank you for the comment! Your comment must be approved first