Echoes of the Past: a Visit to Camp des Milles 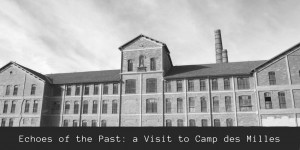 The bus let us off just beside the train tracks beside Camp des Milles. There was no one in sight, and the scattered modern buildings seemed insignificant in the shadow of the World War II internment and deportation camp. A cold wind cut through the streets, adding to the tension already building within our chests.


The camp’s towering roof cut against the sky, making the red stones look cold and harsh. Our shoes clicked on the sidewalk, and every sound we made seemed inappropriate. We had yet to enter, but we did not raise our voices above a whisper. Our group walked close together as we stared at the building and its wrought iron fences.


We knew the rough history of Camp des Milles. It was the only intact and public internment and deportation camp in France. Its rooms had housed thousands upon thousands of persecuted Jews, Gypsies, political enemies, and others who the Nazis deemed dangerous. The tracks we had passed were once cluttered with trains leading to death camps.

Though decades have passed, the building held onto the memories of those who passed through its doors. It has been refitted into a museum. It focused on the history of the camp, the entire war, and the larger issue of genocide throughout history.

It was somber inside Camp des Milles. It was known as a camp of artists, a place where radical or progressive people were sent. The men and women held there, many who were prominent literary or artistic figures, found solstice though the arts.


The tour started in the basement of the building, home to the men’s dorms and morgue. In spite of the chilly, dungeon-like feeling, the walls were etched with faded colorful paintings from former detainees. Scattered along the poorly lit pathways were signs that displayed other artwork, explanations, and biographies.

The next floor was where the women and children were held. Splinted pillars divided the rooms and supported the vaulted ceiling. Fragments of fading sunlight slanted through narrow skylights to puddle on the dusty floors. The somber quiet was even more prominent in this part of the camp.


And then the silence was shattered by a flurry of sound. A pigeon flew from one beam to the other, and each beat of its wings sent a shivering vibration though the stale air. Goosebumps pricked up my arms, and I felt like even more of an intruder. As much as I read and researched and learned, I will never truly know the horror that raged across Europe throughout the war.

Walking through the museum was an entirely different experience from what I had read in history books. Seeing the echoes of the past in its walls and the museum’s descriptions left me shaken. A sort of quiet awareness settled over me. The deportation and internment camp was haunting, but I will never forget my visit to Camp des Milles.


Madeleine C. is the Fall 2016 CEA MOJO in Aix-en-Provence, France. She is currently a junior studying English at University of South Carolina.
Madeleine Collins is the Fall 2016 CEA MOJO Blogger in Aix-en-Provence, France, and is currently studying at University of South Carolina.
Leave a comment
Newest on top Oldest on top
Load more comments
Thank you for the comment! Your comment must be approved first