Adapting to Life Abroad in Aix-en-Provence 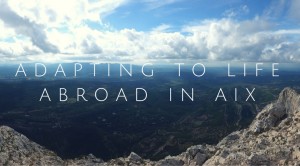 Not every day abroad is full of sunshine and daisies. I’d be seeing the world through rose-colored glasses if I were happy and ecstatic twenty-four, seven. That’s not to say that I don’t love study abroad. Some days are fantastic, and other days the Mistral wind cuts through your coat and scarf to leave you shivering and missing home.

Not too long ago, I had one of those days. I was exhausted from a packed weekend and didn’t have time to catch up on sleep. I was upset because an assignment I turned in for my Creative Non Fiction class was terrible. We embraced the concept of “shitty first drafts,” the idea that a piece never starts out perfect, but this essay was by far the worst thing I’ve ever written.


So I talked to Cathleen, my professor, after class. We had already forged a connection in the beginning of the semester, and she is a person I could always go to for advice, be it on my writing, future, or life in general.

As an American who’s lived in Aix for the past ten years, she understood exactly what was bothering me. She reiterated that it was okay to be upset, to have a bad day, or write a terrible essay. But she told me that it was not okay for it to get me down.

Cathleen explained that on days she was homesick, tired, or overwhelmed, she returned to the little things. She said, “Go to your favorite boulangerie. Get a delicious sandwich or dessert. Then go home and take a nap.”

And I did just that. It was normal to be stressed out in the middle of midterms in a foreign country. Cathleen helped me see things in a clearer light. Following her advice, I decided to go to Bio Langerie, which I frequent at least twice a week.


While I regularly buy lunch there, I don’t know the names of any of the workers, and they don’t know mine either. They know me instead as the curly haired American who is trying her best to learn French.

So when I walked in that afternoon, I didn’t expect them to help brighten my day.

The owner, a kind, middle-aged woman, smiled at me as I walked in. She was surprised to see me, and asked how I was doing and whether I was on vacation for Tous Saints yet. She said most of the schools had begun break, so she wasn’t expecting to see me for another week.

That small moment meant the world to me. I wasn’t just a foreigner in Aix. Someone (besides my professors and friends) knew who I was. I played a role in the daily life of the city. I was a familiar face.


The sandwich I bought that day was the best one I’ve ever had. I don’t know if it was a particularly good batch of bread or just the sentiment behind it. Just as Cathleen had advised, going to my favorite boulangerie had turned my day around. Yes, I was still tired, but a weight had lifted from my shoulders. I knew I was connected to the city.

I’ve come to realize that study abroad is more than just exploring a new culture. Part of it is exploring yourself. In a new place with a wholly different culture, I’ve had the chance to understand myself in ways I wouldn’t be able to at home.

I thrive in the open air. I love talking to strangers and spending time with friends. I get nervous when facing difficulties— like having an entire conversation in French— but am overjoyed when it goes smoothly.

Study abroad is an opportunity to connect with people and the world. This semester has given me the chance to reach outside of my comfort zone, face fears and embrace challenges, and jump into the unknown and find self confidence.


Madeleine C. is the Fall 2016 CEA MOJO in Aix-en-Provence, France. She is currently a junior studying English at University of South Carolina.
Madeleine Collins is the Fall 2016 CEA MOJO Blogger in Aix-en-Provence, France, and is currently studying at University of South Carolina.
Leave a comment
Newest on top Oldest on top
Load more comments
Thank you for the comment! Your comment must be approved first