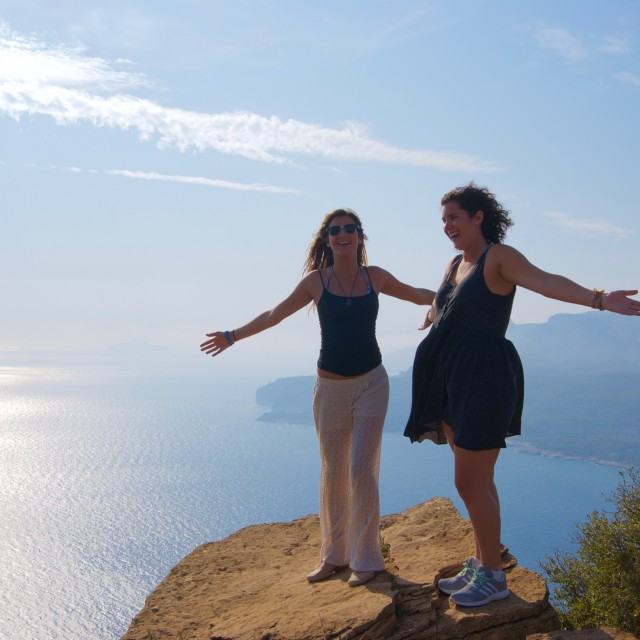 After a little more than a week in my study abroad program in Aix-en-Provence, I can say that I’ve already learned a lot, even before classes have started. While it's my first time abroad, and my first time in France, I’ve begun to find my way about the city and its culture.


Traveling from the U.S. to France was an experience in itself: my first flight was delayed for two hours at JFK because of a nationwide server error, but I made my connecting flight in London without any hiccups. At the Marseille airport, I met up with several other CEA students, and we took a bus into Aix. The ride was a quick twenty minutes, and once we arrived, our group was taken to CEA’s café hour to meet the rest of the group.

At that moment, I felt a pang of excitement and nervousness. I was officially abroad. It was new place - an entire continent I had never visited before - filled with foreign sights and smells. The soft scent of fresh bread hangs in the air, even at night. The streets snaked their way around old stone buildings, humming with conversation and life.


My roommate Melinda and I, along with other CEA students, walked to our apartment to settle in for the first night. The Residence Mirabeau is a small, stone building with large windows and a warm atmosphere. Our room is a small studio apartment on the first floor. Downstairs is our kitchenette and bathroom, and up a narrow flight of stairs is our lofted bedroom.

My first few days living in France were spent familiarizing myself with the landscape, culture, and language. Pam Moore, an art professor, led us on a guided tour of the city. She showed us the most popular cafés and fountains in Aix, as well as important areas like the IAU buildings and CEA office. As our advisors, Nancy and Karen, taught us how to be safe in a new country and environment, I began to learn how to navigate France.


At the start of my first week, I felt that my French was terrible. I didn't want to butcher the language or appear ignorant. Nerves got the better of me, and I would only murmur “bonjour,” “merci,” and “au revoir” to waitresses and waiters in spite of my experience speaking French throughout high school. However, in a matter of days, I gained confidence and began to speak more. Even when I wasn’t positive I'd phrase things correctly, I worked my way through the language’s difficulties.

Many stereotype the French to be rude, but every person I’ve spoken with has been nothing but kind. When I went to the bus station to get a bus pass, the man at the desk spoke to me mainly in French after asking if I could understand, and only used in English when describing the complex parts of the bus pass system. While it was a small moment, it helped me significantly in my adaptation to life in Aix. I realized that as long as I put the effort in, the locals would appreciate my attempt at French.

Beyond the language, I’ve learned to adapt to other French customs and rules. People are expected to be relatively quiet in the streets, day or night, and greet store owners when entering and leaving their business. There are national mandatory quiet hours after 10 p.m. In spite of the southern heat, buildings with AC are few and far between. The French grocery shop daily, and small markets are more common than supermarkets. To say the least, life in the U.S. and France are vastly different.

Everyday, I fall more and more in love with Aix and the surrounding area. In just a week, I have already visited some of Provence’s most beautiful places: Aix’s grand marché, where venders from all over gathered to sell their goods; Le Chateau de Baux, a beautiful medieval castle; Saint-Rémy, the asylum where Vincent Van Gogh lived; and La Ciotat, a beachside town where cinema was invented.

I can already tell that this will be an Aix-cellent semester.

Madeleine C. is the Fall 2016 CEA MOJO in Aix-en-Provence, France. She is currently a junior studying English at University of South Carolina.


Madeleine Collins is the Fall 2016 CEA MOJO Blogger in Aix-en-Provence, France, and is currently studying at University of South Carolina.
Leave a comment
Newest on top Oldest on top
Load more comments
Thank you for the comment! Your comment must be approved first