Galway, Ireland: The Top 10 Must Know Facts About Galway 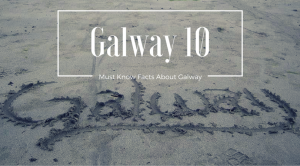 Galway city and Galway County are full of endless adventure, entertainment, beauty, and fun facts. It is impossible to capture all this in a single blog post. So, here are 10 fun, notable facts about the City of Tribes that I learned on my CEA study abroad in Galway adventure:

Fact 1: Galway will be the European Capital of Culture in 2020 and has been known as the Cultural Heart of Ireland.


Fact 2: The Claddagh Ring (the ring with two hands clasping a heart, topped with a crown), Aran Sweater (those cozy wool, off-white sweaters), and the Galway Hookers(a fishing boat, people!) are all Irish symbols that hail from Galway.

Fact 3: The longest place name in Ireland is located in Galway County: Muckanaghederdauhaulia. The Gaelic roughly translates as “piggery between two briny places.”

Fact 5: The former President of South Africa, Nelson Mandela, is an honorary graduate of NUIG (National University of Ireland – Galway).


Fact 6: The Quadrangle at NUIG was built with local limestone in Tudor Gothic style, modeled after Christ Church at the University of Oxford.

Fact 7: Galway is the unofficial capital of Gaeltacht (the native Irish language) and is home to 10% of the Irish population.

Fact 8: In 2007, Galway was ranked as one of the top eight Sexiest Cities in the world, ranked by jobs, style and cultural diversity.

Fact 9: Galway, a.k.a. City of the Tribes, has 14 roundabouts named after the 14 merchant families (or tribes) that founded the town. Among them are Athy, Blake, Bodkin, Browne, D'Arcy, Deane, Ffont, Ffrench, Joyce, Kirwan, Lynch, Martyn, Morriss and Skerrett.

Fact 10: Galway is home to the Old Long Walk and the Salthill Promenade. It is tradition to walk the 2km promenade and kick the wall at the end before turning around.

Keep in mind these are only 10 fun facts. There is plenty more to discover!

“May the Road Rise up to Meet You” -Irish Blessing

Hannah G. is a CEA Admissions Counselor. She studied abroad with CEA in Galway in the summer of 2014.