Kraków: Where Our Eyes Opened The Widest

Each semester, thousands of students from all the universities and colleges in America will scatter across the globe for their semester or year abroad. So when the words “study abroad” enter your head, which other word simultaneously races into your mind?

You guessed it: travel.

It is no secret that one of the main reasons students decide to spend an entire semester so far away from home and school is to fulfill their wanderlust urge to travel and study a bit on the side. As students, we are young, curious and for some reason feel like this will be the last time in our lives to see the world in our “better years.” This proves to even more relevant to the students who decide to spend their semester or year in Europe, where different countries and cultures’ borders are painted closely together on the map like the states in America.

I will openly admit that I chose Prague, not only for my curiosity on what makes the city so great but also because it is a great place to get other places. Four hours from big cities like Munich and Berlin, Germany for a cheap bus ticket price of $20 to $35? You can count me in any day. 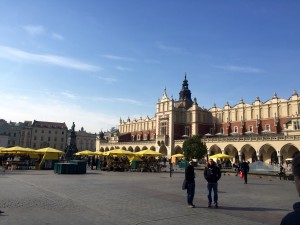 And just with a stroke of luck, the travel gods whispered into the ears of CEA and provided us with an excursion to Kraków, Poland this past weekend. A trip, fully paid and organized for us…you would be crazy not to grab this opportunity! Now let me tell you, it was worth all eight hours we spent on those stuffy buses.

Kraków is the second largest and one of the oldest cities in Poland, dating back to the 7th century. From the cobblestone streets to the unique architecture, Kraków is all around charming and so far one of my favorite cities I have visited.

It is particularly rich in World War II history. Situated a little over an hour away from concentration and work camp, Auschwitz, it was the capital of Germany’s General Government during the war. On Friday of our excursion, we were lucky enough to have walking tours of the city as a whole and the infamous Jewish Quarter. On a cold Saturday, we toured Auschwitz and Auschwitz-Birkenau, putting a somber visual to everything we had grown up reading about the Holocaust in school.

It was haunting touring the grounds and walking through the horrible buildings that so many innocent people who were taken there called their home for a short period. In the women and children barracks at Birkenau, you could see drawings and names etched into the wooden walls, leaving you wondering what they were thinking while they lived there. When walking through some of the former gas chambers, it was hard to believe that something evil and horrific could have happened in human history. When we entered the room full of hair and children shoes, faces went white, eyes were closed and heads dropped slightly shaking.


I think I can speak for all 140 some students that went on the Kraków excursion, that it was truly a remarkable experience. Both interesting and eye-opening, we were exposed to so much history that happened so far from our own homes and seems to be something that haunts Europe as a whole.

Kraków, Poland will most certainly not be a weekend I forget.

Brittan Bates is the Fall 2015 CEA MOJO Blogger in Prague, Czech Republic. She is currently a junior at the University of Arizona.