One of the great things about studying abroad in Paris through CEA is that their involvement in making your experience one-of-a-kind extends outside of the classroom. For example, we are able to go to these events called “Cafés,” where we get to go on excursions or take an extra class and learn more about French culture. Recently I got to go to Café Gourmande, where we got to have French apértifs with a traditional drink, the Kir. The kicker? We made the apértif’s ourselves.

We walked into Café Goumande not knowing what to expect. Were we making crepes? Escargot? Macarons? The options were limitless (until we remembered CEA doesn’t have an oven and we had to reign in our imaginations a little bit).

Finally, it was time to begin our Café, and we were immediately broken into groups of three, a mix of French and English students. We were told to go in and pick out an apéritif to make, all of the ingredients laid out for us already at a table in the front of the room. I for one was incredibly relieved to be put in a group with a French student because much to our surprise the recipes were entirely in French. We picked one and got a-cookin’.

Like a contestant on top chef, I immediately looked at what we needed and scrambled to the ingredients table. The stakes were high (AKA I just wanted to make a dish that everyone would love) and I was feeling the pressure. We chose a tuna dish where you mix it with cream cheese and other ingredients and then top it off with tomatoes and cucumbers mixed with olive oil, vinaigrette, salt, and pepper. 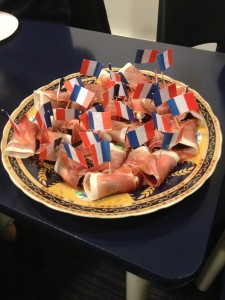 Our group began chopping and mixing like crazy, and every once in awhile I would look up and see how the other groups were doing. I put aside my competitive nature for a second when I was pleasantly surprised to see that all of the dishes looked delicious. My concern became less about making a good dish and more about making sure I was able to try the other dishes.

We took a quick break while we let our apértifs chill for a few minutes while we learned what exactly an aperitif is, as well as what a Kir is and why we drink it will appetizers in France. Kir is a white wine and cassis liqueur cocktail that apparently used to be used as Malaria medicine. One woman liked it so much she decided she wanted to serve it at her dinner party, and, as they say, the rest is history!

We began our little party with a Kir toast and then began to munch on everyone’s dishes. There was hummus and pita, vegetables and a really interesting dip with curry, and many other apértifs to choose from. My personal favorite was the smoked salmon wrapped around crème fraîche, most likely because I was simultaneously having cravings for a bagel and lox and also salmon sushi at the time. Either way it was a convenient way to satisfy my tastes. 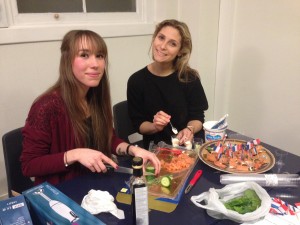 Café Gourmande was a great way to spend my evening with new French friends, Kirs, and apértifs. I can’t wait to bring back the recipes we learned to America and feel super sophisticated when I try them on my friends. Until then, I have no problem making them in my Paris apartment to hone my French cooking skills. 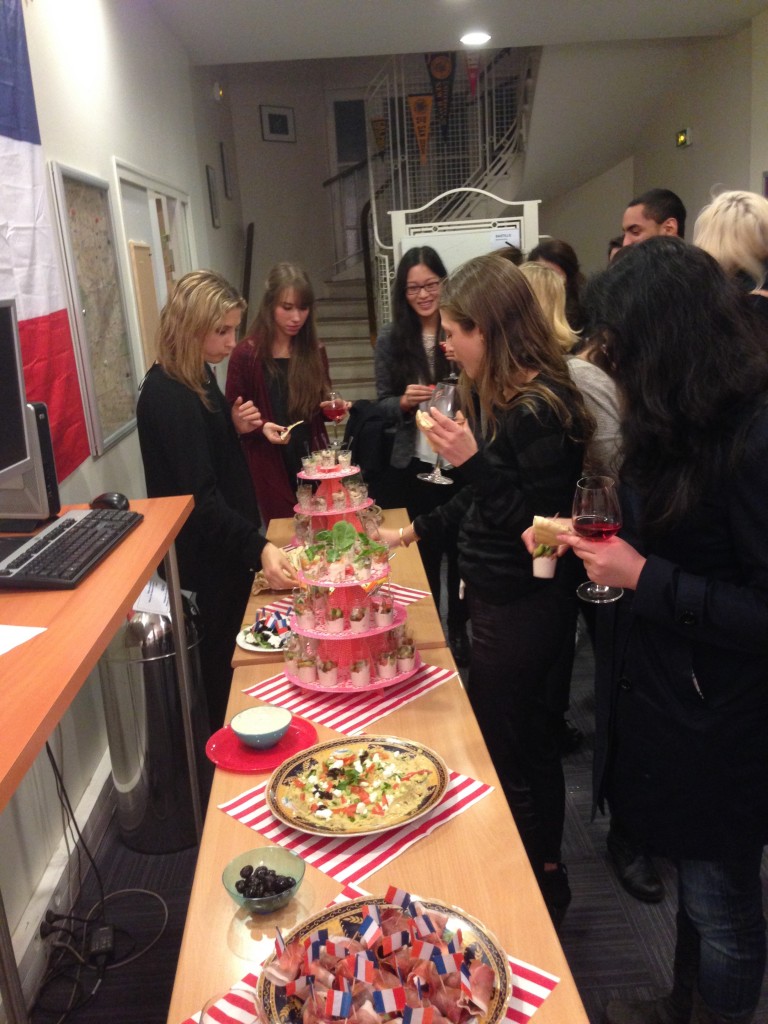 Kacie Diamond is the Spring 2015 CEA MOJO Blogger in Paris, France. She is currently a junior at University of Wisconsin – Madison.