Imagine getting on a train without knowing where you’re going. Yes, this sounds like something that would happen either in an abroad horror story or a romantic chick flick (or both), but really this is what happens during CEA’s Escapade Mystère. The CEA staff plans a secret day trip, and all we know is when to show up for the train. So, at seven in the morning last weekend, my friends and I made our way to Paris Nord train station without a clue what we would be doing that day or even what country we would be in.

The morning was filled with anticipation as the CEA staff filed us onto the train cars with looks that clearly said, “I know something you don’t know!” We took the train to the final stop in Lille, France, and looked around at each other. Was this it? Did they tell us to bring our passports as a way of fooling us? But the morning wasn’t over. From there we were herded onto large busses and finally a voice came over the intercom.

“Do you know where we’re going?”

Rumors of course had been floating around since the beginning of the program. Was it Versailles? Luxembourg? London?

As the bus took off further north we finally had our answer: Bruges!

Since we had no idea where we were going we were lucky to have a full day ahead of us planned by the staff to perfection. We began our day in the small town in Belgium with authentic Belgian waffles and Belgian hot chocolate. Our day continued with a traditional Belgian lunch planned by CEA at a local restaurant that also used to be a brewery. 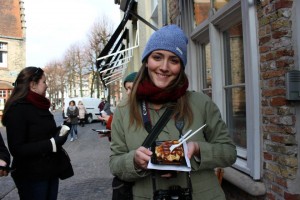 For a morning that started out as a day of mystery, by the afternoon we were in full travel mode with big plans as we set off during our free time. In full day-trip-form we learned how to navigate the town quickly so we could find all of the spots we wanted to hit. And for not knowing where we were going that morning, we had accumulated quite a long list of things we wanted to do and food we wanted to try. 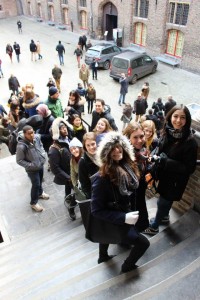 We began our afternoon climbing the Belfry Bell Tower to get a beautiful view of the small town in Belgium. In the end, it was worth the 366 stairs we had to climb and more, because afterwards we had built up enough of an appetite to try some authentic Belgian fries topped to our hearts content with condiments.

We finished off our long and exhausting day with shopping for souvenirs – Belgian chocolates, obviously—and began the ride home feeling full, happy, and ready for a good night’s sleep. Somehow in that twelve hours we had managed to learn about a new city, its language, and its special surprises. We could have never known when hopping on the train at 7 a.m. what kind of day we were in for, and fortunately for us, it was one for the books.


Kacie Diamond is the Spring 2015 CEA MOJO Blogger in Paris, France. She is currently a junior at University of Wisconsin – Madison.
Read more about our CEA Content Creators.
Leave a comment
Newest on top Oldest on top
Load more comments
Thank you for the comment! Your comment must be approved first