A Semester of Spanglish 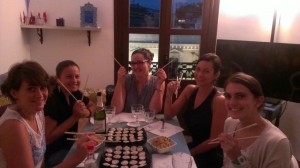 You step from the plane to the tarmac in Granada, Spain. It’s hot, you’ve been traveling for over 20 hours and it feels like you just stepped onto the set of a western movie: dry, bare land with an occasional palm tree. In your hungry, sleep-deprived state it’s easy to imagine tumbleweed rolling by. An airport worker guides everyone into the baggage claim and says something in Spanish. At least, you assume it’s Spanish, because this is Spain after all. But really it sounds like gibberish. You just follow the crowd, hoping someone understands what’s going on, all the while thinking to yourself: I have to live here for a whole semester? What have I gotten myself into?

Welcome to my first encounter with the Spanish language outside of the classroom. Real Spanish is a lot different than class, where you can just ask the professor to repeat a phrase or, better yet, just say it in English. When I decided to study abroad in Granada, I knew the language immersion would be hard but I didn’t think about it enough until it actually happened. There have been countless times here where I’ve misunderstood because of the language but my first few days were by far the most confusing. 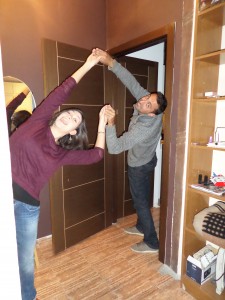 Skip ahead to a bus stop in a city with the narrowest streets you’ve ever seen. There are students grabbing their bags and meeting their host families for the first time. You hear your name called and awkwardly introduce yourself to your “host mom”. She takes one of your bags and you start walking to your new home. You suddenly realize she’s talking to you. But she has a strong accent and you have to ask her to repeat herself. After the third time you understand she’s asking how your Spanish is. You figure she probably already has her answer.

That first night is a blur, getting a tour of the apartment and instructions on where to put laundry and your belongings. The only thing you’re sure you understood is that the water is good for drinking because it comes from the Sierra Nevada Mountains nearby. You think at some point she told you about the other people you live with, but that’s just a guess.

During dinner that night you pretty much just smile and nod even though you have no idea what’s being said. Get used to doing that for the next several weeks. At times you nod and everyone looks confused. They speak slowly and throw in some English to explain they’re asking you questions about yourself and what food you like. After dinner you go for a walk with your host mom and host sister. You see them talking and hear sounds coming out of their mouths but you would have better luck understanding them if they were speaking whale. Your host mom asks you about something but you don’t understand. She switches to English and you’re so shocked you can’t even form a response in English or Spanish for a while.

Skip ahead almost three months and you’re sitting in the main room with your family after school. You’re all working on homework, joking and watching TV together. And guess what, it’s in Spanish. AND you understand what’s going on. Sure, you’re far from fluent and have to ask people to repeat things but it’s less than before. It’s amazing how much you can learn about the world from learning another language. Some people might say it’s a small world but it’s also a lot bigger than you ever thought.

Amber Johnson is the Fall 2014 CEA MOJO in Granada, Spain. She is currently a junior at Colorado State University.