Hey, Mom! Can you make these meals for me?

I’ve always been a picky eater. When I was getting ready to study abroad I was really 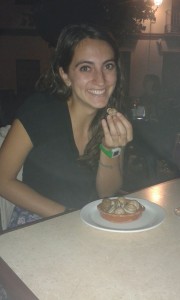 worried about the food. I had heard that since Granada is so close to the Mediterranean Sea, seafood is more common than in Colorado. Of all the foods I don’t like, seafood is my least favorite, so I was a little worried that I would come to Granada and hate all the typical food here. Before leaving the United States, I decided to challenge myself to have an open mind during my study abroad experience by doing one thing that scares me every day. This includes trying foods I usually wouldn’t. In the past two months I have tried countless new things and would you believe I’m not a picky eater anymore? Here are some of my favorite Spanish dishes.

1. Tortilla de patatas. This is a very common Spanish dish and it’s easy to make. In Spain the word “tortilla” does not mean tortilla. Tortilla de patatas is actually a potato omelet. I usually hate eggs but this dish has grown on me. It is not like an American omelet, it is more like a pie than an omelet. Plus, the egg doesn’t add flavor so much as act like the glue holding the thick slices of potato together. It’s chewy and hearty and a must try in Spain.

2. Paella. This is a famous dish in Spain. It’s like rice and peppers and all types of meat from chicken to pork to shrimp to clams, you name it it’s a possibility. The most important part is the sauce. It gives the rice a yellowish tint and is delicious. Note: ordering paella for any meal but lunch and on any day that’s not the weekend is a dead giveaway that you are a tourist.

3. Huevos con verduras. This is a simple yet delicious meal my host mom makes. It is a fried egg with cooked vegetables. The vegetables are a mixture of tomatoes and peppers and onions mostly but there could be more, who knows? I usually don’t like eggs but I have discovered that mixing your egg in with the veggies is almost like you’re not even eating an egg. This is a dish I plan on making for myself when I get back to the United States, it’s that delicious.

4. Caracola. One night, I walked up to a restaurant in the Albaycin – which is a neighborhood in Granada with a lot of history and a great view of the Alhambra – for a drink and some caracolas. Caracolas are snails. I didn’t understand that fact until I was pulling out a chair to sit at the table. My host sister said they were delicious at this particular restaurant so I figured I might as well try them. She taught me how to get the snails out of the shell using a toothpick. They were completely whole, with the eyes sticking out and everything. So I closed my eyes, counted to three and popped it in. The first one was weird but the second one was better. By the fifth snail I was officially a fan.

No matter where you go in Spain, or actually the world, I’m learning it’s exciting to try new things with an open mind, whether it’s food or something else. You might be surprised at how much you like it, I know I was.