What most surprised me about Chile was the abundant representation of globalization and the presence of numerous North American companies including: Walmart (Lider), Starbucks, MacDonalds, KFC, Taco Bell, Nestle, I mean even Chuck E. Cheese's is in Chile... I could go on. In fact, I think Nestle is more popular in Chile than in North America - Nestle sells a product for just about everything here!

Another surprise was that the majority of movies were played in English here, the exception being cartoon films. It really surprised me because the English literacy rate is quite low in Chile. One study found that out of the 60 countries, Chile ranked 44 in the proficiency bracket and below Latin American nations such as Peru, Mexico, Uruguay, Costa Rica and Argentina. Although the English literacy has drastically improved since 2011 when in was mandated for grade 5 and above to begin English classes, English still isn't widely spoken here and I was astonished they didn't dub all films. Point being, don't worry you will still be able to find everything from Oreos to PB&J. 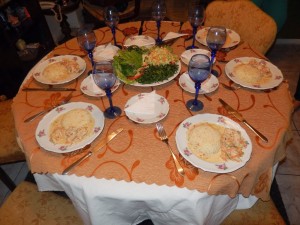 Meals are different in Chile - not so much Chilean food itself but more the time food is eaten is drastically different. In Chile, it's not popular to eat a full dinner like it is in the States. Lunch is the main meal of the day and is typically consumed around 2 p.m. Here, it's more customary to eat a large lunch followed by a small snack called once anywhere from 6-9 p.m.

Once normally consists of some form of bread, jam, cake, cheese, or fruit. Popular drinks for once include coffee and tea. Once is a group endeavor, similar to "afternoon tea" in England. It's a time when everyone in the family gathers around the table and shares their day. It's also popular to eat a smaller helping of what you ever served at lunch for once. Once you accustomed to the change in rhythm and meal times you might even come to appreciate eating a larger lunch and small dinner time snack! 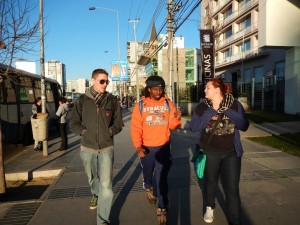 It’s common to greet everyone in the group individually, even if their are 20 people at the event you just arrived at you should greet each one of them in the respected way. Always address people by titles, if the title in unknown use señor or señora. Chilean culture has a great deal of respect for the elderly so you avoid at all costs disrespecting an elder.

¡Salud! Danielle Banks is the Fall 2013 CEA MOJO in Viña Del Mar, Chile. She is currently a senior at Texas A&M University.
Read more about our CEA Content Creators.
Leave a comment
Newest on top Oldest on top
Load more comments
Thank you for the comment! Your comment must be approved first