12 Lessons I Learned as a Tourist in Italy

January 08, 2014
by CEA Content Creator
SHARE SHARE
During the last week of October, we had a few extra days off for traveling, which was perfect because not only was it Halloween, but we could also spend a little more time in our vacation spot of choice. In Spain, this extended vacation is called a puente, meaning "bridge" in Spanish, which refers to the extra Monday or Friday that people often take off if a holiday falls on a Tuesday or Thursday - it "bridges" the gap and allows for a longer vacation.

Two other girls in my CEA Seville program and I decided that we wanted to spend our puente in Italy, so we chose to explore Venice and Florence! Along the way, we learned some important (and some silly) lessons, so I thought I would share a little of what we discovered!

1. When you are looking for the time that your train departs, it is important to look at the "departure" sign (instead of the "arrival" sign), otherwise you may be very confused and think that your train does not exist. Hannah, my travel buddy, and I were trying to figure out when our train from Milan left for Venice, but of course, we were looking at the wrong side and it took us a while to figure it out.

2. In Italian, peperoni does not mean what you think it means. So, if you order a pizza with peperoni, you will end up with peppers rather than pepperoni - all the same, it was delicious. 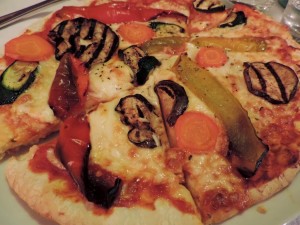 3. If you're in Venice, buying a pass for the water bus is a good idea. You either walk or take the water bus, which costs about 7 euro each time you get on it. The pass was a good investment for us because we were there for several days.

4. Venice is expensive. I had been warned that it was expensive, but I was still surprised by how expensive it was. At restaurants, they always charge for water, somewhere between 3 to 5 euro per bottle (of different sizes, too). On the other hand, pizza is one of the least expensive foods to eat. In the six days that we were in Italy, we ate pizza five times.

5. It's a good idea to have some knowledge of the language of the country to which you are traveling. The reason I chose to study in Spain was because I speak Spanish. As I headed out for Italy, I realized that I knew almost zero Italian. Thankfully, Spanish is close enough to Italian that I could pick out words here and there and most people spoke English and Spanish in addition to Italian.

6. Sometimes, you pay 4 euros for a cup of coffee and a place to use the Wi-fi. And other times, you randomly discover that you get free Wi-fi in the middle of the canal on a gondola ride. Whenever we wanted to use our phones, we had to find a place with Wi-fi, which meant finding a restaurant or cafe that had Wi-fi. But, we also discovered on our last night in Venice that there's some sort of free Wi-fi offered in certain parts of the city. My lovely friend Addie found this out while we were in the middle of our gondola ride. 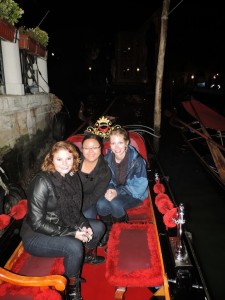 7. When in Italy, gelato is a must. Because it's gelato and it's delicious. Need I say more? 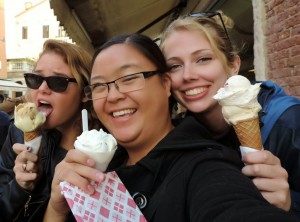 8. Take pictures of your experiences, but don't forget to live and enjoy the moment, too. When we explored the islands of Venice with a tour group, there was a couple that was so focused on taking pictures that it made me wonder if they were even enjoying the tour at all. 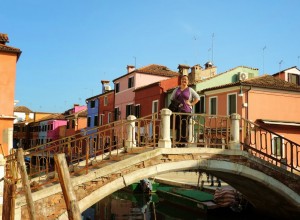 9. If you only have 24 hours in a city, try to plan out where you will go and what you will see as best you can. But you also need to admit that you cannot possibly see and experience the entire city in just one day. Especially one as amazing as Florence. We saw one museum, part of the Duomo (but it closed in the afternoon), and the Ponte Vecchio. Be sure to try and reserve tickets to popular attractions ahead of time if possible so you can avoid standing in line for hours! And definitely try to get an early start to your day to take in as much of the city as possible. 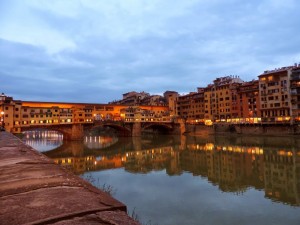 10. Before you get in a taxi, it's a good idea to know generally where you are going. Hannah and I almost took an hour-long taxi ride to our hostel because we did not realize it was so far outside of the city of Milan. Thankfully the taxi driver helped us figure this out before we got too far.

11. Churches are not very good landmarks when getting directions. We tried to figure out how to get to a restaurant in Bergamo (just outside of Milan), but there are so many churches in Italy (and Europe in general) that it was hard to tell which church to "turn right at."

12. No matter what, you will have both good and bad parts of traveling. Just try to focus on all of the positive things that have happened. Out of all six days that we traveled, only one was a little frustrating, but it wasn't too bad because we were not actually sight-seeing that day - we were trying to find our last hostel to stay in before we headed to the airport to fly back "home" to Sevilla. All in all, the trip to Italy was a huge success. 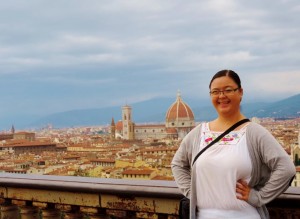 I hope you all enjoyed a few of my travel tips and lessons that I learned. Traveling is quite fun, but is definitely exhausting, too! I think the most important thing is just to enjoy the trip while you can - you make great memories!
Joy Bullock is the Fall 2013 CEA MOJO in Seville, Spain. She is currently a senior at Seattle Pacific University.
Read more about our CEA Content Creators.
Leave a comment
Newest on top Oldest on top
Load more comments
Thank you for the comment! Your comment must be approved first