January 07, 2014
by CEA Content Creator
SHARE SHARE
Barcelona is famous for many different aspects of its culture; the incredible food, the wonderful music, the impressive architecture, the beautiful beaches, and the rich Catalan history. But perhaps one of the better-known products of Barcelona is its outstanding and successful fútbol team, Futbol Club Barcelona (or FCB).
Futbol Club Barcelona is the professional football – or what we in America call soccer – club based in Barcelona, Catalonia, Spain, and is also often called “Barca” by people who live here. For a Catalonian person the club is much more than just a sports team, it represents a huge part of their culture. The team is also very, very good at the sport they play, which certainly doesn’t hurt. 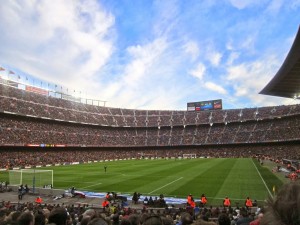 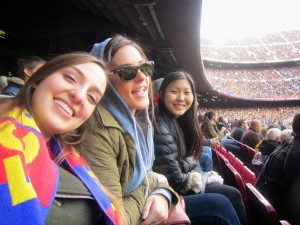 FCB is the world’s second-richest football club as well as being the most successful club in Spain, having won over 83 official titles. The team has one of the biggest fan bases in the world, and a long-standing rivalry with Real Madrid, which makes for a very exciting game between the two teams – also known as “El Clasico”. The game was a few weeks ago, and tickets to the stadium are obviously very expensive, so my friends and I watched the match from a sports bar near our apartment and it was an awesome experience! The bar had large flat-screen televisions set up all over the room so we could watch the game from wherever we were standing. It was extremely hot and crowded with people, but I’ll never forget the feeling that came over the room when Barcelona beat Madrid – it was incredible.
Last weekend I had the amazing opportunity to go see an FC Barcelona game at the team’s home stadium, Camp Nou, through the CEA study abroad program in Barcelona. The day before the game my roommate and I went out to Passeig de Gràcia, a fantastic shopping district here in the city, in order to buy jerseys to wear to the match, and we both chose ones with the name of our favorite FCB player, Neymar. 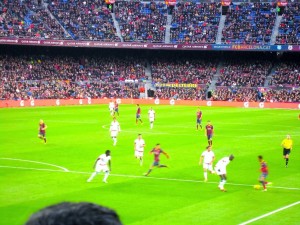 After taking several metros, receiving our tickets from CEA, and walking for about twenty minutes, we finally arrived at the famous stadium. We were shocked at how empty the stadium was (and how close are seats were) so close to the start of the game, but it seemed to miraculously fill up with just minutes to go. The game itself was very different from sports games in the United States, in that there were no replays so we had to pay a lot of attention to every play to make sure we didn’t miss anything. It was also missing the usual fanfare at a typical American game – there were no cheerleaders, pump-up songs, or prizes thrown into the crowd. It was just the game, plain and simple, and the fans remained involved by chanting and jeering along with the plays.

Barcelona was playing Granada, so it was pretty obvious we were going to win from the start, but it was still awesome watching the ball go into the net over and over again. We were all freezing, but it was totally worth sitting through the whole game without the usual breaks we have in American sports. The final result was Barcelona with four goals to Granada’s zero, and the fans were all very excited and cheered loudly at the end of the game.
I’m so thankful I got to experience this Barcelona tradition and I know it’s something I will never forget!
Megan Lax is the Fall 2013 CEA MOJO in Barcelona, Spain. She is currently a junior at Duke University.
Read more about our CEA Content Creators.
Leave a comment
Newest on top Oldest on top
Load more comments
Thank you for the comment! Your comment must be approved first