The French-German Impact: Excursions along the Border

December 27, 2013
by CEA Content Creator
SHARE SHARE
My fourth stroll out of Paris was more than just another trip to the French countryside.
It was a weekend of chilling lakeside breezes, 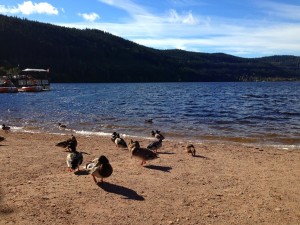 getting acquainted with some feathered friends along the shore, 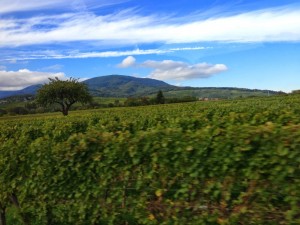 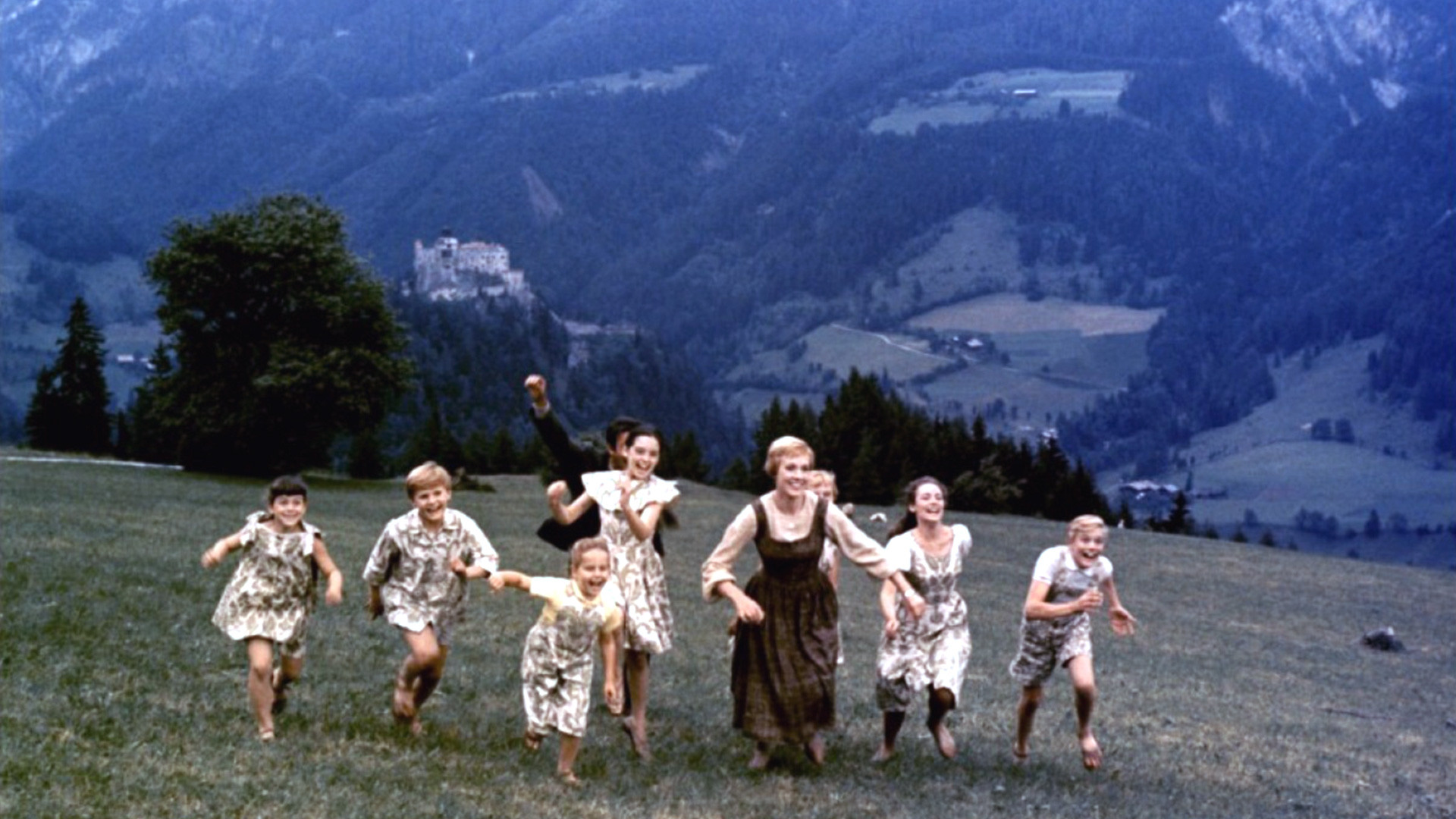 and meadows that seemed to be pulled straight out of The Sound of Music! 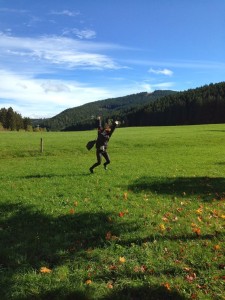 Yours truly, frolicking through the meadows of Titisee, Germany 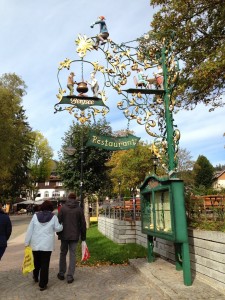 I think it's safe to say that each landscape above was dangerously close to perfection.
However, the most impactful aspect of the trip was the undeniable mélange (mix) of French-German influence that was experienced throughout.
Titisee, Strausbourg, Fribourg----just the sheer depth of French-German history embedded in each of these three cities was enough to open my eyes to a greater, more complex facet of international relations. 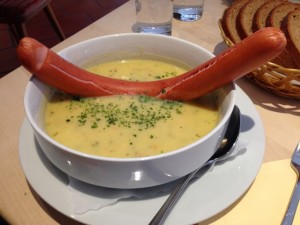 Some aspects are more streamlined than others, such as this rather obviously German dish of Sausage and Potato Soup. 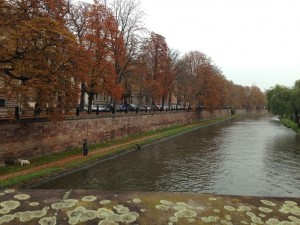 
Others, like the city of Stausbourg, are much more open to dispute, having established customs rooted in both German and French culture.
In a nutshell, Strausbourg is the capital city of the Alsace region of France and just a hop and a skip away from the German border. Strausbourg and the general region of Alsace are historically German speaking, which explains the lack of French essence in "Strausbourg." 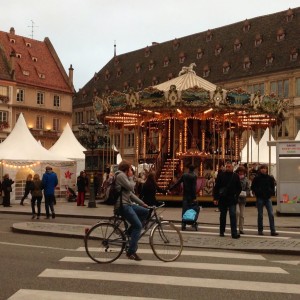 For centuries, the possession of Strausbourg has been wrestled over,
and it's history has been the cause of both quarrel and unity between France and Germany.
Although there were several instances in history when Strausbourg was declared a free republic, forces throughout history (a.k.a. power-hungry royalty) tampered with this status, as they tend to.
For instance, Strausbourg was able to remain neutral all throughout the Thirty Years' War from 1618-1648 and I would like to add that this war primarily took place in present day Germany! Given the city's dangerously close vicinity to the war, remaining neutral was certainly an accomplishment!
The great King Louis XVI of France was then overcome with ambition to extend the borders of his kingdom, thus, leading to the first of many future victimization's of this quaint, once-independent city.
To keep this in a nutshell,
some other major events that shifted the "ownership" of Strausbourg were:
the Franco-Prussian War, World War I, the Treaty of Versailles, and World War II. 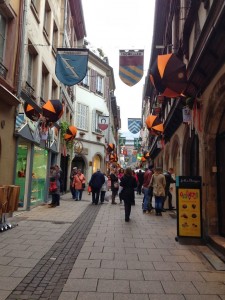 Now, the city is divided into ten districts and it is here that we're able to see the differences in influence. Districts like Centre République,Conseil des XV and Centre Gare have a French flair while Koenigshoffen and Wacken sound evidently German. 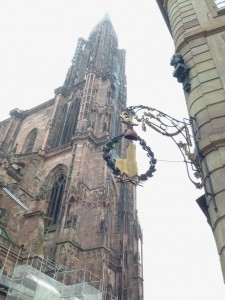 Voici, the breathtaking Strasbourg Cathedral, is made of a statement-shade of red sandstone!
It was the perfect gateway landmark into the countless other areas of the city and by far one of the most intricately structured medieval cathedrals my eyes have ever laid eyes upon. 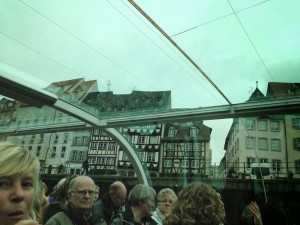 Later in the evening, we were given the opportunity to take a boat tour, 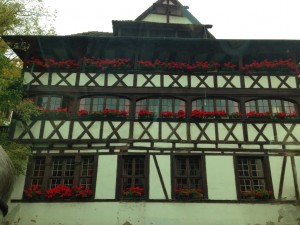 to look at the charming architecture, as well as the European Parliament situated along the river, 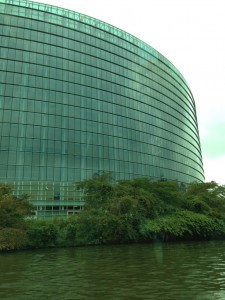 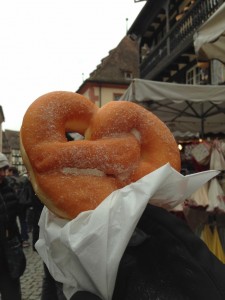 and follow the boat tour up with possibly the sweetest, fluffiest pretzel in all of Europe. 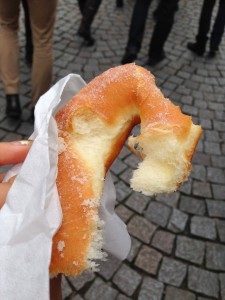 The experience of German-influenced cuisine didn't end there! 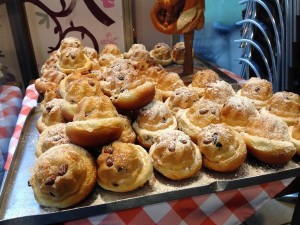 Bakeries were overflowing with this raisin-chunked bread, called Kougelhopf, 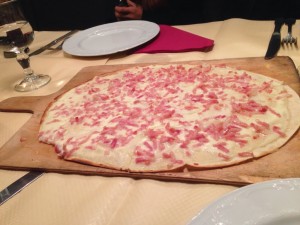 
and TARTES FLAMBÉES!
As you can see, they were served as both a savory main dish (above)
AND dessert (below)! 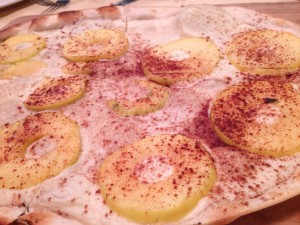 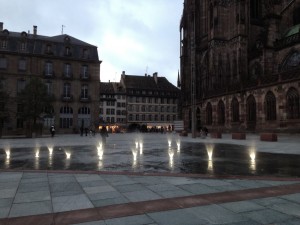 On a scale of one to ten, experiencing the French-German borders were a solid nine I'd say.
It felt satisfying to stretch a bit and go above and beyond the French culture. Strausbourg was the mix of amazing food, bustling town of enchanting cobblestones, and a complex, complicated past.
How much more of an experience could you ask for from a city?
Monica Park is the Fall 2013 MOJO in Paris, France. She is currently a senior at the University of Michigan, Ann Arbor.