November 18, 2013
by CEA Content Creator
SHARE SHARE
Sometimes we all want to make our own path and plan our own spontaneous trip. And that folks is how I ended up in Mendoza, Argentina, for a nice three-day trip with two of my friends. My advice for you is to go through a hostel when planning trips around Argentina or whatever country you choose. This is because not only are hostels cheaper, but you can also plan excursions through hostels that include transportation. Plus, you can meet some cool people in hostels who love to travel just like you!
I booked my trip to Mendoza by using a hostel company called Hostelling International. The trip cost me about $300 for three days and two nights at the hostel, bus fair, and two excursions. This company also has packages to other provinces like Patagonia and Salta and Jujuy.
Dale, on to more information about the trip!
Departure:
We left Thursday night and came back Monday afternoon, but the bus there are back was an overnight 14 hour bus or so.  However, buses in Argentina are pretty nice and comfortable. You get dinner and breakfast on overnight buses, as well. But, I did not like the food so much and I was a vegetarian at the time so could not eat half of the meal. So, definitely bring snacks for the bus ride if you are kind of a picky eater, get hungry easily and/or just enjoy snacks.  Another thing is that the Buenos Aires bus station in Retiro can be kind of tricky to navigate. Getting there earlier than you usually would maybe a smart idea.
Mendoza:
Day 1:
Mendoza is the wine providence of Argentina. One of the most popular things to do in Mendoza is go to a bodega (winery).  The first day I arrived at Mendoza I went to two bodegas one large one called Dante Robino and a smaller one called Vistandes. It was really interesting learning the different processes used to make wine! The bodegas were pretty but the plants were not in blooming season because I went during winter time. But despite this, I still had a blast. After this, I went to an olive oil factory, learned about this process, and then feasted on bread, olive oil, and assorted dried fruits. 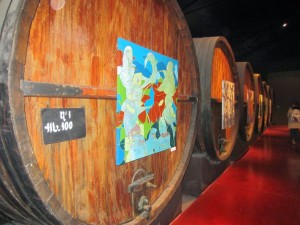 Day 2:
During day two, I spent the whole day doing a high mountains Andes tour! We went to view the highest mountain peak in the Americas called Aconcagua. The Andes mountain range was beautiful and during warmer climates you can go to the border of Chile and Argentina.  Also, after you are done spending time in Mendoza, Santiago, Chile is just a bus ride away. My friends and I could not go to Santiago, because the roads were blocked due to heavy snowfall.  If you are planning to go to Santiago after Mendoza go when it starts to get warmer so the same thing won’t happen to you. 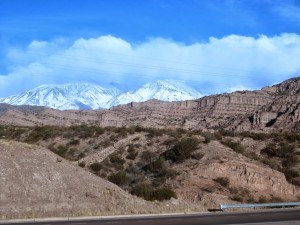 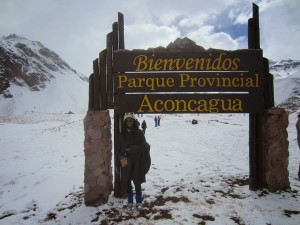 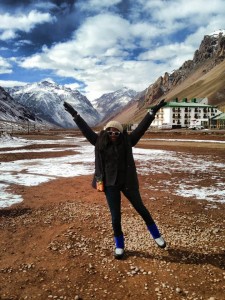 Day 3:
This day we did not choose from one of the hostels excursions but instead went to a neighboring town to go to a hot springs park called Termas Cacheuta. Once again, it was winter so I was a bit cold. But I have the tendency to always be kind of cold, even in hot temperatures. Yet, I did tough it out and try some of the less warm pools that were outside and the views from these pools were breathtaking! 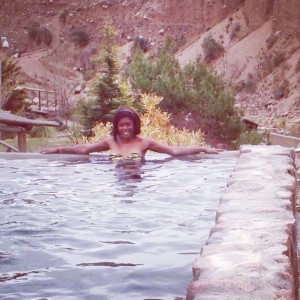 ~Mendoza is a great and easy long weekend trip. Three days was plenty for me. It is also one of the relatively cheaper trips to go on. So, if you are on a time crunch and a budget, definitely give it a thought!
-        - Chau chau
Maya Sykes is the Fall 2013 CEA Mojo for Buenos Aires, Argentina. She is currently a junior at the University of Oklahoma.
Read more about our CEA Content Creators.
Leave a comment
Newest on top Oldest on top
Load more comments
Thank you for the comment! Your comment must be approved first