November 14, 2013
by CEA Content Creator
SHARE SHARE
It's difficult to think of Paris without first and foremost associating it to art.
France has an extensive history as the home, if not the temporary home of, a majority of the world's most renowned artistic figures----Claude Monet, Edgar Degas, Eugène Delacroix, Auguste Rodin, Henri Matisse, Édouarde Manet, and the list goes on and on.
I found it particularly amazing that the first Sunday of every month, entrance to museums are free.
That's right, FREE.
From where I stand, this shows quite a lot about the relationship between the Parisian culture and how highly they hold the culture of art.
In America, those who are well-versed in art are seen as well cultured and more often than not, someone who has gone out of their way to go to museums and read up on the history and symbolism of certain pieces.
However, for Parisians, art seems more so a social necessity and being knowledgeable in the arts appears to be an obligation as opposed to a privilege. 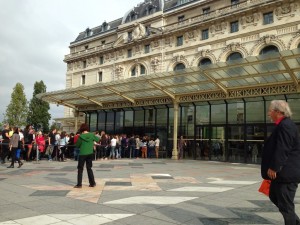 So with that said,
Voici, Le Musée d'Orsay!
Situated right along the Seine, I have a special place in my heart for this museum.
You see, I had never been one who fancies trips to the museum because quite frankly, I always found them to be painfully boring and far from stimulating.
Luckily, my closest friend began introducing me to this entirely different world where art is not spoken of because one wants to show that one is highly cultured but rather
because it is so subtly integrated into our lives and personally, I gain interest very quickly in things that are more directly applied to the environment that surrounds me.
For instance,
the three following photos were taken at the Masculine/Nude Man exhibit currently running in the Musée d'Orsay. 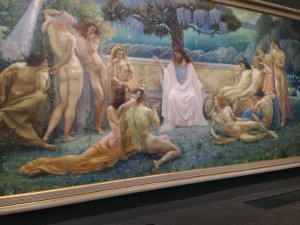 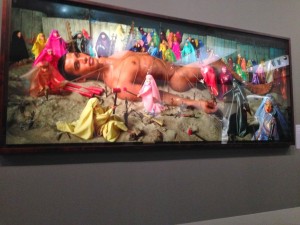 To be honest, the first thing that catches the attention of spectators was clear...men in the nude.
If we peel off the first layer, we learn that for once, it is a way to bring the bodies of men into the light. It has always been natural for the nude woman to be objectified in this manner and now, it is time for the man to experience a similar embodiment. This is a relatively general concept of the exhibition.
If we delve further, we find that the curator of the museum had been planning on doing an exhibition on the male nude for the past fifteen years.
So why is it just now that this inspiration has surfaced?
Fifteen years ago, the curators did not believe that Parisian society could handle such a radical compilation of art. It would have instigated a frenzy and would have been seen as nothing more than a vulgar presentation of taboo! 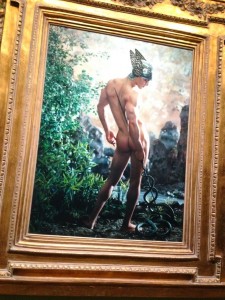 This is just one of the countless examples of how art takes a simple understanding of a concept and blows it out of the water.
It opens the doors to understanding a culture on a level that is so much deeper and profound than any other outlet.
I was certainly shocked to discover a connection between the opening of this exhibition and just how much the Parisian mindset has changed within the past decade
to adapt to modern concepts such as those embedded within the exhibit. 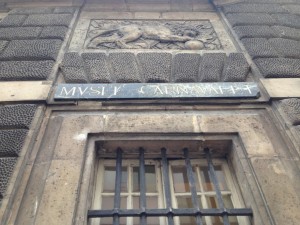 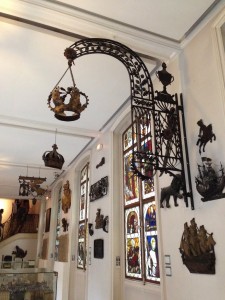 Among the more analytical, controversial ideas I learned at Orsay,
there are so many other small, yet quirky facts you can take away.
In the distant past, Paris, like many up and coming cities, did not have addresses. There was no number designated for each home, which as you can imagine, made it difficult for the postman to deliver mail as well as for the townspeople to generally know which structure belonged to whom. 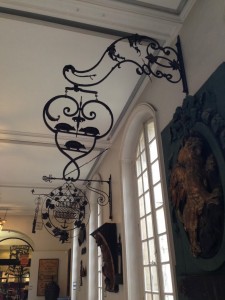 Thus, these elaborate metal signs were placed outside each home and citizens would identify the drawings, associating them to respective people and places.
The sign above are rats. Can you imagine to whom this home belonged to?
It was in fact the BAKERY!
I found that very clever. 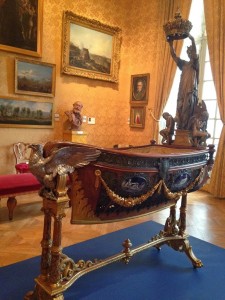 Last but not least, there are some displays that are simply aesthetically pleasing, such as the grandeur of this BASSINET. It may be a baby's bed but you can't deny that it looks fit for a king. Pun intended.
Monica Park is the Fall 2013 MOJO in Paris, France. She is currently a senior at the University of Michigan, Ann Arbor.