A Sunday Morning in Barna: 19th Century Architecture and Tapas

November 14, 2013
by CEA Content Creator
SHARE SHARE
Alicia Correa Mañas, a local student at the Universitat Autònoma Barcelonacollaborating with CEA and Mackenzie Gregor, a junior at California University of Pennsylvania, talk about the 48h Open House Barcelona and De Tapes Per Barcelona.
Alicia: Barcelona not only amazes tourists but also locals. Walking around this city you can see how different architectural styles get mixed up together. With the 48h Open House Barcelona  we got the chance to visit for free a building that represents the Catalan aristocracy of the 19th century in its bloom, the Cercle del Liceu. It was inaugurated in 1847 as a private club in the English style next to the Liceu Opera House and has elegant salons, conference rooms, a library and restaurant among other facilities.  It was a great experience for all of us because we could not only enjoy the beauty of a building that is usually private but also learn about its history from local university students that are passionate about architecture. Even though its luxury shocked us, all that money was to support the idea of a humanist society. This center is still used as a social club for the Liceu members and we were able to sit on the couches and chairs. It was a very inviting place to read a book or discuss the news and we did not feel like we were disturbing the peace of a museum. 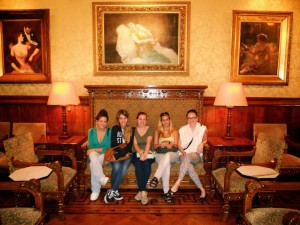 After our visit, it was time to eat. Luckily for us, Barcelona was holding a “tapas” contest (De Tapes Per Barcelona ) and every bar offered its best dish."When we were trying to decide on the spot to eat, we were a bit worried that Mackenzie would get tired or annoyed because we didn’t have an exact plan. We had heard that Americans like everything to be fast and planned out. Thankfully Mackenzie was very easy going and did not mind checking out several places before picking one. When we finally found a place, we got the meatball with cheese and barbeque sauce next to Via Laietana, one of the main streets in Barcelona. It was the best way to start the day! 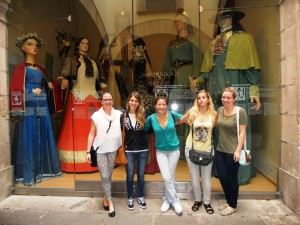 Mackenzie: I like getting out in the city and seeing different things so the 48h Open House Barcelona sounded like fun. I met Alicia, Berta, Ariadna and Lara outside the Cercle del Liceu. Once we got in we saw the rooms that are used for receptions and they were really interesting and elegant. The artwork was incredible! My parents are really into architecture and Newport mansions built back in the 1900s and this seemed like a Spanish version of that.  I enjoyed the colors, mosaics, and the local style. They had etched marble with patterns that were chipped in on the floor, walls and ceilings. I had never seen anything like it before. 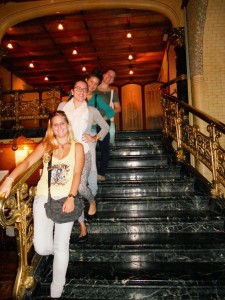 After the visit we just kind of wandered around looking at the different restaurants in the De Tapes Per Barcelona contest. Before we went in they told me that it was really common to stand while eating tapas. Just like they said, the whole bar area was full of people who were trying the “competition” tapa and it was delicious! Overall it was a fun Sunday morning and I got to explore another side of Barcelona. 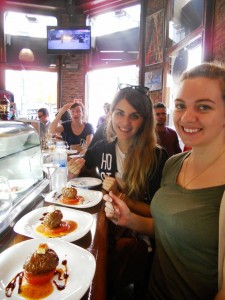