Hiking in the Serranía and A Trip to Ronda

This past weekend, we went hiking in the Serranía and then visited the town of Ronda. We were scheduled to leave Seville at nine in the morning; but as I walked to our meeting place, it began to pour down rain and by the time I arrived at the meeting spot, I my pants and shoes were soaked! I thought to myself as I waited for others to arrive, "Am I in Seattle?" I laughed, shrugged it off, and thought perhaps the trip might be cancelled. However, the two wonderful ladies who planned this excursion for us insisted that we try to go to the mountains in the hopes that the weather was good enough to hike. Thankfully, they were right and when we arrived in Ronda, the skies were clear and it was perfect weather for hiking.

We divided into two groups - one half went with a tour guide who spoke English, and I stayed with the group that wanted the tour given in Spanish.

As we hiked, I was very content, because I felt like I was back home in the Pacific Northwest - the skies were cloudy, it was somewhere around the mid-60's and a little breezy (absolutely perfect for hiking), and we were surrounded by so much green! As much as I love Seville, I have hardly seen any green/nature. This hike was timed perfectly. They told us it would take about an hour and a half to complete, but it took us two hours - I think part of this was because we were stopping to listen to our guide tell us about various things that we encountered along the way. 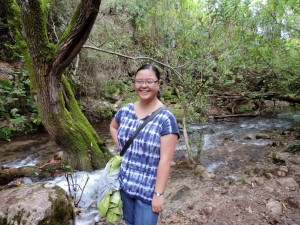 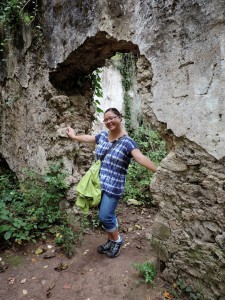 After we finished the two hour hike, we took a quick bathroom/water break and hopped back on the bus for about another hour, where we finally arrived in the white town of Ronda!

I didn't get any pictures of our lunch, but for the most part, the tapas in Ronda were not too different than those in Sevilla. I ate with three other girls - we all shared and enjoyed some typical tapas and good conversation. After lunch, we as a larger group went on a tour around Ronda.

The main sight of Ronda was Puente Nuevo - the "new" bridge. I think what makes it so magnificent is that it was built with the same stone that lines that canyon, so the bridge appears to blend in with the scenery, making it appear grand and natural at the same time. 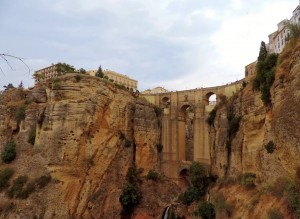 And as I previously mentioned, Ronda is one of the white towns of southern Spain, and the white buildings contrasted well with the cliff, too. It was absolutely beautiful and pictures do not do it justice! 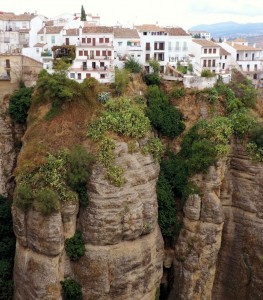 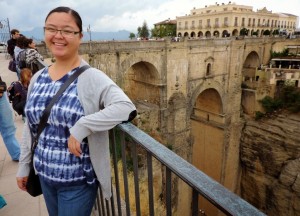 We saw some other buildings around the town as well, but to be honest, the New Bridge was probably the more unique part of Ronda. There was also a famous bull ring there, but I did not get any pictures of it and we did not go inside it.

Hopefully this blog post did some justice to the wonderful day excursion we took to Ronda - because I thought it was an absolutely wonderful way to start off the weekend!

Thanks for reading! ¡Hasta luego!

Joy Bullock is the Fall 2013 CEA MOJO in Seville, Spain. She is currently a senior at Seattle Pacific University.
Read more about our CEA Content Creators.
Leave a comment
Newest on top Oldest on top
Load more comments
Thank you for the comment! Your comment must be approved first