October 29, 2013
by CEA Content Creator
SHARE SHARE
On October 11th, I went to the Argentina v Peru world cup qualifying game, and I loved every second of it! Let me just tell you, when it comes to fútbol (soccer), I am inept. I know literally nothing about it. I am a bandwagoner. I watch the World Cup and cheer randomly for teams. I watch "Bend It Like Beckham” like every girl has and should. And, when I play soccer, which is rare, I run aimlessly around on la cancha (field). But, I have always wanted to go to a soccer game and hope that one day I when I play soccer won’t look like this gif … awkward.

Pero bueno, hablamos about my awesome experience and how I got there in the first place!
How I got there:
I bought my tickets online off of ticketek.com.ar. You can only buy tickets for the game online or the day of before the game, at which times you're not necessarily guaranteed tickets.  All of the seats are assigned except for the popular tickets. Those sections are kind of like cement benches and you can sit wherever. My friends and I got these because we went in a big group and thought this would be easier than having one person buy them all on their card. We sat in the popular centenario section and each of our tickets cost $100 pesos (about $13-$18 dollars give or take depending on what exchange rate you have). We were high up, but it was a good areal view. Plus, there is a track around the whole stadium, which means the stands start pretty far back from the field. So, I bet that being lower could have given us a weird angle view point (but don’t quote me on that, because no estoy segura - I am not sure). I also liked our spot, because the side we were on faced the jumbo-tron. And who doesn't like jumbo-trons? I know I do. 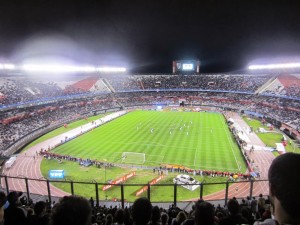 After we bought our tickets we had to go pick them up at the location stated on the ticketek website that was not the River Plate stadium. (The game was at the River Plate stadium in Núñez). To pick up your ticket you need to bring the card you used to pay for the ticket. This whole process of buying and getting the tickets all and all was pretty easy.
The Pre-Awesome Experience:
To be honest getting to where our seats were located was hectic. There are not any signs of where to go for what spot, so we kind of went with the crowd and winged it. Well, we were at the wrong side of the stadium, and instead of only walking around the stadium to get to the right side, we had to walk more or less 8 blocks out of the way and back to get there. So, if you buy the same seats as I did walk down Monroe street to get there. Also, when going through security, which is pretty lax compared to the states, the women  go through one security section and men on the other. We also did not know this. But finally, at last, we made it to the game, right at the starting time, 8pm, and managed to find a spot big enough, so that we could all sit together!
The Awesome Experience: 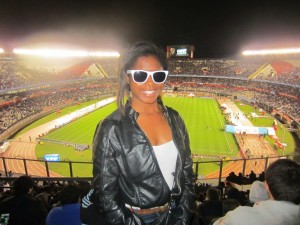 Now, the game begins! As I said before I know nothing about soccer, but it was tons of fun! Argentina won 3-1! Lavezzi scored 2 goals and Palacio scored the final goal. Messi did not play during this game. This game was a World Cup prelim match even though Argentina already qualified for the 2014 World Cup in Brazil about a month ago.
I knew none of the Argentine game chants but they were fun! I enjoyed clapping along and pretending like I knew them!

If I get the chance I will definitely go back to another game!
~ Chau Chau
Maya Sykes is the Fall 2013 CEA MOJO in Buenos Aires, Argentina. She is currently a junior at the University of Oklahoma.
Read more about our CEA Content Creators.
Leave a comment
Newest on top Oldest on top
Load more comments
Thank you for the comment! Your comment must be approved first