My other two blog posts were over fun things to do in Buenos Aires, but now that you have read those posts, I bet you are sold on coming here for whatever reason you may chose. So here is a handy dandy list of important things to help you get around Buenos Aires. To make it short I am only going to talk about 3 things. Money, transportation, and language. Because I believe these three basic things are pretty important when traveling. Don’t you?

The currency in Argentina is the Argentine peso. I advise before you enter the country to exchange about $50-$100 dollars worth in pesos to get by when you first arrive. Afterwards, only exchange money at a place called Xoom. You will get a better exchange rate that way.

Tip: If you use Xoom you will need to bring your passport to the money pickup place.

Roads
Argentinians drive on the same side of the road as the States, but one thing that is different is that the stop lights go from red to yellow to green and green to yellow to red. I actually like this better because when I am crossing the street and it turns from red to yellow I know I need to pick up the pace because the light is about to turn green.

Buses
The word for bus in Argentina is collectivo. Buy a Guia-T book, because it has all of the collectivo route information in addition to what each collectivo looks like. My favorite collectivo is the 152 - it goes down Santa Fe and Cabildo, mirroring the routes most of the subte (subway) stops take.

The price of the bus varies by distance. When you get on the bus, you tell the bus driver where you want to go and he/she prices your ride accordingly. If you don’t know exactly where your stop is just say “una setenta por favor”, which is $1.70 pesos. That is most expensive price for a collectivo (with a SUBE card, which I will explain in a second) and even that is pretty cheap.  Collectivos stop every 2 blocks and once you are ready to get off, you press the red button near the door and the bus driver will stop at your stop.

Subway
The subway is called the subte.  I take the D line about twice a day it is pretty simple. The cost of the subte is $2.50 pesos. If you are like me and will be spending a while in BA getting a SUBE card is a good idea. You can use this card to pay for the train, collectivo, and subte. You can find them at any kiosco (kiosk) with the sign SUBE on the window or at the post office, and recharge them at many kioscos with the sign and at all subte stations.

Taxis
Taxis are pretty much the same. You do not have to tip taxis, and the fare is more expensive at night than during the day. Look for a taxi that says Radiotaxi on it, those are the most reliable.

Tip 1: Comoviajo is a very helpful website, when it comes to finding your way around the city. http://beta.comoviajo.com/index.php/como-viajo-en-transporte-publico/

Tip 2: I also advise getting a SUBE card, because bus fares are cheaper with it and if you want to use a bus without a SUBE card you are going to need monedas (change), which can be a hassle. Furthermore, if you get your Sube card at a post office, you may need your passport. If you don’t get it there, you will have to enter your information online using the card or the card will deactivate. 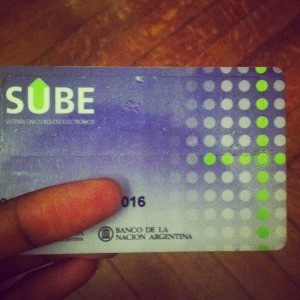 Argentines use the voseo form, which is using “vos” instead of “tu”, when talking to in second person. For example, it is “De dónde sos” (where are you from?) instead of “de dónde eres” or “vos hablás” ( you talk) instead of “tu hablas”. There is also an accent over the “a” ,as you can see above.  This is very easy to pick up and if you speak using “tu” people will still be able to understand you. Don’t worry.

Tip 1: Here is a helpful website that goes more in-depth with the voseo form. http://www.speakinglatino.com/3-tips-to-improve-your-argentina-spanish-grammar/

Tip 2: Here is a video of me speaking Castellano (Spanish) using what I have described above.

Maya Sykes is the Fall 2013 CEA MOJO in Buenos Aires, Argentina. She is currently a junior at the University of Oklahoma