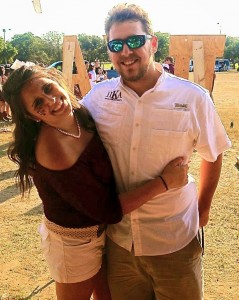 Nothing makes my heart happier
than Fightin' Texas Aggie Football!

Meet Daniella:
A gringo living, loving, and learning
in Viña Del Mar, Chile for a semester

¡Hola! Mi nombre es Daniella y estudio español en la universidad de Viña Del Mar.
Two Different Names,Same Person:
It's strange because the way I identify with myself and behave in Chile is completely different than in the States. Back home I'm Danielle; I'm a psychology major who wants to work for the U.S. Department of State after graduation, who has had the same friends since freshmen year, and who can't wait to graduate in August! Here in Chile, I'm Daniella... a gringo from Texas who studies psychology and can't roll an "r" to save her life.

Adjusting takes time. EVERYONE I've spoke with agreed that when we first arrived we all had anxiety about making new friends, language barriers, and gosh knows what else... but eventually you embrace your newly issued identity and settle in!

READ ABOUT MY IDENTITY STRUGGLES BELOW:

Back home, I'm outspoken, talkative, and always try to facilitate discussion during classes or with friends, however, that's not the case in Chile. The language barrier makes me so incredibly shy and inverted that the majority of the time I'm just thankful when class is over... but class is never really over because the entire country is a "classroom!"
I came here with the very basics of Spanish (the classes I took in high school... remember I'm a senior in college now) and communicating with the Chileans can be extremely frustrating. I can't tell you how many times I've simply given up because my accent is too thick, I can't remember the right verb, or I don't want to ask them to repeat themselves for the fourth time. In fact, last week I went to the park and had to laugh at myself because I was surrounded by Chilean children that ranged from 10-14 maybe who all could speak more fluent Spanish than I could... and I was 7-11 years older! Despite my terrible Spanish, everyone in Chile is really encouraging and patient with me as I take 5 minutes to tell a 30 second story.
I really think the quote below pretty much speaks for itself:
"It was tough at first.  Moving to a new country is like being born all over again. You are just like a baby. You can't speak, you can't move around, and you don't know the culture"
- Humans of New York
I've been living in Chile for 2 months now and let me just say that my Spanish has immensely improved, with a lot of help from my v-e-r-y patient host mother. I've simply been born again in Chile, weird to say as a 21 year old. I know my way around the public transport in Viña, I've learned the Chilean culture (even though my stomach hasn't quite adjusted to the late meal times), and I can stutter my way through any Spanish conversation...at least I try too!
Optimism is all you really need to learn a language.
Optimism and little or no fear of embarrassment!
Meet My Family:

My Host Family and a fellow CEA student: Sarah Ruszkowski

My host family owns a restaurant called "Txiprion", where we go every Sunday to share a late lunch and enjoy each others company. Back home, I always enjoyed lunch and the good conversation that accompanied it. However, lunch in Chile makes me wish I had learned more Spanish before coming, especially as I sit and listen to Spanish being thrown across the table from one family member to the next. Sometimes the entire table will break out into an eruption of hysterical laughter and, even though I completely missed the joke, my only response is to smile and laugh along with my family! It's great. :)
Like I already said the language barrier will create a kind of alter ego between your Spanish and English personalities... embrace it! I know I sure do! In fact, my Spanish is so good that my host dad once told me at dinner that I should make sure to get a job where people speak English... then he suggested President of the United States, la presidente Daniella Banks! I just laughed and told him, in my best Spanish of course, that the U.S. government would be shutdown for 4 years if I was elected...
Bienvenida a la casa de Anita Alvarez Carrizo
Welcome to my *Chilean Mom's Home*

A picture is worth a thousand words so enjoy a little over 5,000 below! 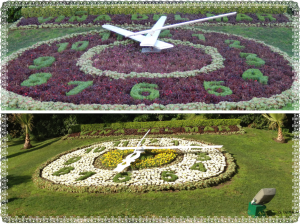 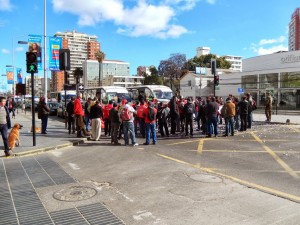 Protests are fairly common in Viña. Here a protest
has one of the busiest street in the city blocked. 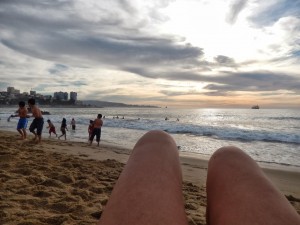 The main square in Viña always has some form of entertainment.
Here a group of friends were free style dancing.
They were incredibly talented!