October 08, 2013
by CEA MOJO
SHARE SHARE
I finally had my first meeting with mi intercambio this week. Originally, I was supposed to meet with another intercambio, but he never showed up; so, after figuring a few things out, I was connected with Emilia. I thought it would be a fun idea to do a bit of a comparison between Emilia and myself. 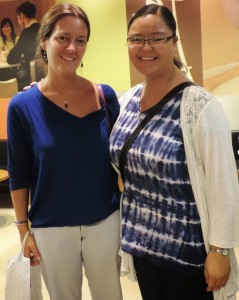 Who: Joy (Me) and Emilia
What: IntercambioCultural Exchange Program
Where: Sevilla, España
When: Once a week
Why: To practice Spanish/English

Emilia is 39 years old and she has lived in or near Seville her entire life. Currently, she lives very close to the airport.

She lives with her mother, because her father died a few years back. She is the second oldest of six children: 2 sisters and 4 brothers.

She works at a school for children and teaches 3-year old's English. The school is semi-private, since parents have to pay a small fee for their children. This school is the same one that she attended when she was younger.

Why be an intercambio?
Emilia learned English when she was in school, so she studied in America, somewhere near Washington, D.C. for four months.

She has also traveled to London, but she says she prefers American English over British English because she is more accustomed to the American accent.

And since Emilia teaches English to kids, she wants to practice as much as she can. She laughed and said that three-year old's do not speak very much, so she wants to broaden her English vocabulary.

Los fines de semana (Weekends)
Emilia told me that she does not do very much during the weekends because she is usually tired from working with kids. She rests, goes out with the same friends she has had since high school, and spends time with her family.

Favorite thing about Sevilla?
Emilia’s two favorite things about Seville are the weather and its location. The city is well-situated because it is close to the beach, but also the mountains. 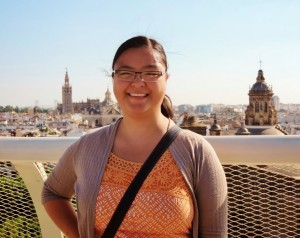 About Joy:
I am 21 years old and I am a senior in college, studying accounting with an interest in tax. I grew up in Seattle, Washington. For the next three months, I am living in La Alameda in the city of Seville because I am a student and I am studying here.
When I am not living at my school, Seattle Pacific University, I live with both my parents in a nearby suburb of Seattle. I also have a younger sister, 18, who just started school at the University of Washington.
Why be an intercambio? I took about six years of Spanish classes in junior high and high school. I’ve been exposed to Peruvian Spanish, Mexican Spanish, Costa Rican Spanish, and a little bit of Castilian Spanish before I came to Spain.

I wanted to come to Spain to practice my Spanish and I know that the best way to do so is to talk, talk, and talk a LOT!

The accent in Seville is also a bit of an adjustment to get used to, so it will be good to talk to someone who can speak a little slower, help me expand my vocabulary, and correct my mistakes.

Los fines de semana (Weekends)
I don’t think I have had a consistent weekend activity here in Spain, probably because there is so much to do and see! So far, I have seen some of the sights around Seville, visited Portugal, watched a bullfight, and gone out for tapas.

Favorite thing about Sevilla?
I’m not sure if I can pick a favorite thing! I know that I fell in love with the city almost from the first moment I arrived. One thing that I really appreciate about Seville is that it is a good mix of modern and historical culture. I walk past the world’s third largest Catholic cathedral every single day, but I also walk through a modern shopping district, too. The mix just adds a certain charm to the city.

What is your favorite food to eat in Sevilla?
Even though I learned that paella is not traditionally from Seville, my Señora (Lola) makes the best that I have ever tasted. It is a rice dish typically made with seafood, but Lola makes it with chicken and pork. I also really like espinacas con garbanzos, which is a common tapa here and it is cooked spinach with chickpeas - absolutely delicious!
Joy Bullock is the Fall 2013 CEA MOJO in Seville, Spain. She is currently a senior at Seattle Pacific University.