March 07, 2012
by CEA Content Creator
SHARE SHARE
Although I’ve only been studying abroad in Paris for just over a month, I already have four places that I would recommend to anyone visiting the French capital, no matter how much time they have here.  In no particular order, they are:
Sacré Coeur at Montmarte: Perched on a hill overlooking the entire city of Paris, this church is breathtaking, both inside and out.  Following Catholic tradition, the Blessed Sacrament has been continuously on display above the high altar since Sacré Coeur was built in the late 19th century.  While the tranquility and stained glass are worth coming to see on their own, the impeccable view of the Parisian skyline is really the main attraction.  If you have the time, wind your way down the café filled streets of Montmarte and find yourself at another famous attraction, the Moulin Rouge. 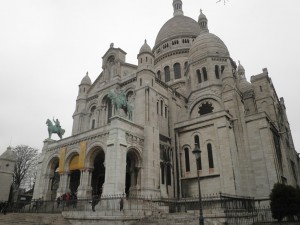 Eiffel Tower at night:  It wouldn’t be a travel blog about Paris if there wasn’t at least one mention of the Eiffel Tower in here.  While fun to visit and stroll around during the day, after dark is really the best time to visit this incredible monument.  The entire tower becomes illuminated in a golden glow, creating a sharp and beautiful contrast with the purple sky and white buildings around it.  Every hour on the hour, the tower erupts into a light show of epic proportions, as the entire structure is covered in the seemingly random flickers of a thousand white lights. 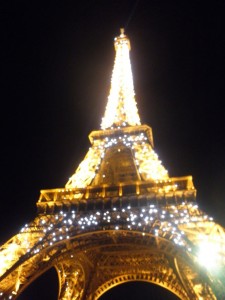 Place des Vosges:  Although it’s not warm enough to really be a hub of activity, Place des Vosges is still a great breath of fresh air in the Marais district.  Surrounded by high-class apartments, this former home of the French aristocracy is saturated with fountains, shady trees, and, you guessed it, a statue of an old white guy riding a horse (King Louis XIII).  After class at the nearby CEA global campus, it’s refreshing to grab a baguette, hang out, and watch the Parisian day unfold around me.
Invalides (WWI and WWII museums, Napoleon’s tomb):  The dominant architecture and alignment of cannons along the fence of ‘Les Invalides’ make it hard to miss and provide a clue as to what lies within its walls.  First, the Army Museum has an amazing collection of World War I and World II artifacts and exhibits, providing a detailed history of the devastating years between the early and mid 1900’s.  The second attraction at Les Invalides is the tomb of Napoleon.  The grandeur and beauty of Napoleon’s final resting place are truly breathtaking, but what I found even more moving was the amount national pride that resided in that one building.  Visiting here was a great chance to brush up on my European history and to day dream about an age of kings and conquerors, where the geo-political world that we know today was still in the process of creation. 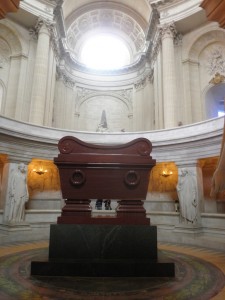