February 08, 2012
by CEA Content Creator
SHARE SHARE
This past Friday, CEA Barcelona took our students to the beautiful Monastery of Montserrat, located on a rugged mountain not far from Barcelona. The Monastery is an emblematic enclave of Catalan culture and home to one of the most popular pilgrimage and tourist destinations in Spain.
Montserrat Mountain is not only for devotees, but also for nature-lovers, as well. It is an immense rocky mass, crowned by sharp peaks and crests of rocks. In itself it represents a unique feature in the landscape, and in its setting, no other or graphic phenomenon can detract from it. In terms of landscape it is exceptionally stunning, geologically unique, and has a notable wealth of fauna. Here, history, nature, art and culture come together as in few other places. 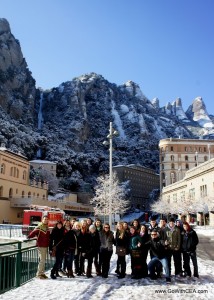 In addition, the Monastery of Montserrat, located near the top of the 4.000-foot mountain, is home to about 80 monks, who welcome visitors and invite them to participate in their daily celebrations of mass and recitations. The basilica also holds a highlight attraction: the 50-member “Escolanía,” one of the oldest and most renowned boys' choirs in Europe, dating from the 13th century. Every day you can hear them sing the Montserrat’s hymn in the basilica.
After visiting the Monastery, we had a fantastic experience eating calçots and learning what a calçotada is first hand!
”Calçot” is the name given to a local variety of spring onion, which is cultivated in a very unique way, in the Tarragona region.
The “calçotada,” which originates in Valls, a town in the province of Tarragona, is made by cooking “calçots” over an open flame. When cooked, the spring onions char on the outer layer, known as ‘camiseta’ or ‘sumarreta,’  which blackens while the inside remains tender.
They are eaten by removing the outer layer of ash and dipping the vegetable into “romesco” sauce, a spicy sauce made from peppers, crushed almonds, olive oil, tomato, parsley, vinegar, salt and pepper and spices. Calçots are eaten as a preamble to a ‘parrillada´of meat. Generally eaten standing up, the calçots are held with the left hand in order to remove the ´sumarreta´with the right. Once this has been removed, the calçot is dipped into the sauce and eaten. 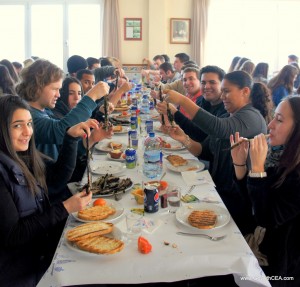 Afterwards, we headed over to the historical town of Sitgesfor a city tour.
Set on a cliff overlooking the sea, Sitges’ topography is the reason why its small historic quarter has remained so intact. Fishing and wine-making have always been the local industries, coupled with tourism, which took off at the beginning of the 20th century.
The Passeig Maritim is a long promenade which curves along the shoreline, where your eyes will be drawn upward to the majestic church of Sant Bartomeu and Santa Tecla. Sitges also holds a number of well-known festivals. It is the only place in Catalonia that takes Carnival in February seriously, with a long weekend of parties and parades. The Sitges’ “Festival de Cinema” in October draws top film makers and is a showcase for new home-grown talent.

You can see some pictures of the day on the following link!
Exploring Catalonia:Montserrat, Calçotada and Sitges