December 15, 2011
by CEA Content Creator
SHARE SHARE
- Prepare for a little detective work. It turns out that the French family your friends dine with weekly have plenty of jealous friends who want Americans to come over and expose their children to English. You receive an impossibly zealous and all-out adorable introductory e-mail from the mother of a family in which she gives bubbly introductions to herself, her twin 16-year-old sons and her 8 year-old daughter. Any mention of the father is tantalizingly absent. Upon arriving with your roommate at the family’s cozy suburban home, try and mask your surprise when the father gets home from work while you’re sipping celebratory champagne marking the mom’s new job. He gives you a firm handshake. Take note of Laurent’s slip (the better-speaker-of-English but always quiet son) that his parents have different last names when he walks you to the RER station at the end of the evening. You start sleuthing through details with your roommate while standing on the platform: how everyone at the table smiled when recounting family vacations, a picture of the parents on a shelf with their arms wrapped around one another, the father’s brandy that he retrieved from a crystal bottle in the cabinet. Your Communication class later tells you that 1 out of 6 couples are unmarried in France and that the number is rising. Realize marriage has no correlation to how much a couple loves each other and how happy of a family they raise.
- Avoid trying to explain the American dish “Surf ‘n Turf.” You will feel like an idiot. Try and defend to your roommate later that evening how you thought it would translate somehow culturally or just be an interesting concept. You will have been wrong.
- Know that frank conversation and pointed questions are actually methods of meaningful exchanges with the French (at least that’s what your Communication book tells you). When the mother asks why you chose to take English-speaking classes in France when you could have had the same experience anywhere, know that it’s an honest curiosity; it builds from her gratitude of having native English speakers to combat France’s “problem” with learning English (a problem you do not notice, given the family’s already impressive vocabulary). Explain how you have come to find that Paris is the best city in the world, that you would love to come back and settle down and work. You’ll be startled by how true that sounds. Explain that language is the only thing holding you back.
- Eat a small lunch. You will leave full. Full. Every week.
- Note how Michael Moore is a window into your family’s view of America/Americans. Try and give an accurate view of American politics considering that you are liberal and your roommate is conservative. Land on the conclusion that different people inevitably will always want different things. The father will tell you that this is the exact definition of politics in France.
- Laugh heartily at mispronunciations in both languages (only applicable once dinners become routine and you find yourself past the line of dinner guest but slightly before family friend). Ex. When Gérard,(the louder twin who is somehow last in his English course despite your weekly meetings) finds mousse in the dictionary and exclaims wide-eyed, ‘Mickey Mousse!’ Or a week later when Laurent looks up the English translation for “faire la vaisselle” and says that you must hate to do the “DIE-shes.” Or how your Chicago accent butchers “b-Aaa-llet” and much laughter ensues. Take kindly to the cute look any family member gives you after every attempted “s’il vous plait” or “bonsoir.” Missed pronunciations are hilarious, so laugh at them. Heartily.
- Watch a segment during the weekly French news with your family entitled “Obese Children in America” and prepare for the family’s exclamation, “That’s YOUR country!” Not only will there be stock footage of overweight young girls swimming in a pool with their t-shirts on, the family will audibly gasp in disgust. Kindly explain how not all Americans are like this, how obesity is an actual problem, and how embarrassed you are that the family now believes every American swims with a shirt on.
- You will not know how to say goodbye. Write a note. Realize it doesn’t quite get at anything and dodges the possibility that this might be the last time you ever see them (But maybe somewhere down the line…) Bring your camera to the final Christmas meal: foie gras, frogs legs, and escargot. A meal you don’t deserve but that the family believes you do. Be sure to write down their address to let them know, at their request, when you get your first job, when you get married. Invite them to call you if they ever find themselves near Chicago (which seems just a little unlikely). But you will mean it. After they drop you off on your corner, after a bit of wine, you will realize that this hasn't just been important to you, this hasn’t just been fun. This hasn't just been cultural. It has been your new family, far away from home. 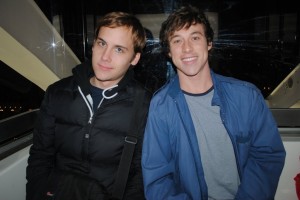 Ben Mueller and his roommate, Colin Olsen, in Paris.
Ben Mueller is currently a junior at the University of Illinois at Urbana-Champaign. He just finished the Fall 2011 semester in Paris.
Read more about our CEA Content Creators.
Leave a comment
Newest on top Oldest on top
Load more comments
Thank you for the comment! Your comment must be approved first