Eating Our Way Through Britain

October 21, 2011
by CEA Content Creator
SHARE SHARE
Walking around your study abroad city isn't the only way to investigate its culture. With local cuisines playing such a large role in a city's personality, allow your taste buds to do some of the exploring for you, and sample as many traditional dishes as you can get your hungry hands on.
Follow CEA's London Program Director Harriet Clement as she eats her way through Britain. Bon Appétit!
Traditional British Food 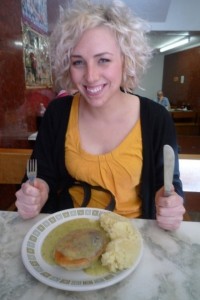 Fish and Chips
Probably the UK’s best known traditional food, Fish and Chips was originally a working class meal made with cod or haddock and chipped potatoes. Nowadays, this delicious treat can set you back upwards of a ‘fiver’ but it is well worth it!
Bangers and Mash A traditional English meal, bangers and mash simply consists of sausages (bangers) and mashed potatoes (mash) usually served up with onions and gravy.
Sunday Roast dinner
The British Sunday roast is served on Sundays (can be served in the early afternoon for lunch or for an evening meal), and includes roasted meat, roasted or mashed potatoes, veggies and the all-important sides: Yorkshire pudding, stuffing and thick gravy.
Bubble and Squeak
B&S is essentially a meal made from last night’s leftovers. Commonly, this plate includes fried vegetables from a roast dinner such as potato, cabbage, carrots and peas. The name comes from the bubble and squeak sounds the dish makes as it cooks.
Spotted Dick This is a steamed dessert made with sweet, rich custard and mixed with dried fruit like raisins and currants. 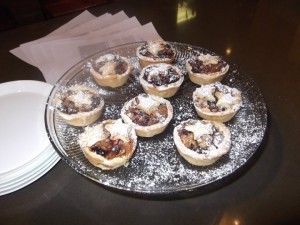 Mince Pies
A traditional Christmas sweet, mince pies cradle mincemeat and a variety of spices within its small, bowl-shaped crusts.
Cream Tea
Cream Tea is an afternoon snack that consists of scones, Devonshire clotted cream (heavier than whipped cream) and jam, all served alongside tea.
Fry Up AKA Full English breakfast This delightful breakfast is the breakfast of both champions and heart attacks! The meal boasts bacon, eggs, sausage, toast, tomato slices and mushrooms. Regional substitutions include black or white pudding, porridge, oatmeal, potato cakes, soda bread, and laverbread. Most Saturday and Sunday mornings you will see the local cafe – or ‘caff’ as it is pronounced in London – full of hungry customers waiting for a full English breakfast and a brew (cup of tea).
Shepherd’s Pie / Cottage Pie This savory pie is made with either minced beef (cottage) or lamb (Sheppard’s) and vegetables, and is then topped with mashed potatoes and sprinkled with cheese.
Laverbread Laverbread (bara lawr in Welsh) is seaweed that is cooked and pureed into a blackish-green paste. Most commonly eaten in Wales, the seaweed usually is harvested off the west coast of Britain. Often times the puree is mixed with oatmeal and then fried to accompany a traditional breakfast, such as bacon and eggs.
Haggis Traditionally a Scottish dish, Haggis is made by filling a large sheep stomach with a blend of minced offal, fat, oatmeal, stock and seasoning. This mix is then boiled in the stomach until ready to eat. 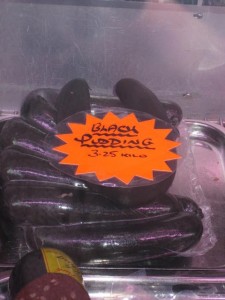 Black Pudding This is a sausage made with blood and fat, and more frequently eaten in Northern Ireland and Scotland with breakfast.
Marmite This savory brown spread derives from yeast and tastes best when eaten (a small amount) on a piece of buttered toast, in a sandwich, on bread, or when used as a cooking ingredient.
Yorkshire Pudding Often served alongside a roast dinner, Yorkshire Pudding is a puffy, egg-heavy pastry that tastes best with gravy.
Program Director for CEA Programs in London, Harriet is a native Londoner and has lived in and around the city for most of her life.
Read more about our CEA Content Creators.
Leave a comment
Newest on top Oldest on top
Load more comments
Thank you for the comment! Your comment must be approved first