Running a Marathon While Studying Abroad in France

On Sunday, April 20th, 2008, when most of my group mates were just getting ready to go to bed, I was waking up before the sun to start stretching. When I arrived in Antibes to study at CERAM-EAI in the French Riviera with CEA, I never thought that at any point I would be running a half marathon, but when Kristin, our director, said that there was a race in Nice, I figured it would be a great idea to get into shape since I wasn't doing any other physical activity. I signed up to do the 10k race, and began to train for it. I'll admit I was setting my sights a little high for it being my first race, but I figured I could do it. After about a month of on-again off-again training, it was finally one week until the race, and my knees were bugging me. I decided to rest that week for the big race, and hope that it was all for the better. 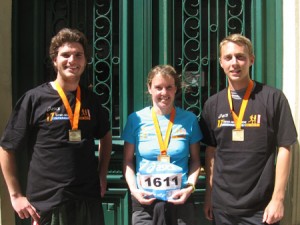 Kristin and Gerry picked Noah and I up, and we headed off to the race. We ran in a group and were talking about the possibility of Noah and I continuing after the 10k for the whole half marathon, or 21k, to see if we could do it. I decided by the 4th kilometer that I was going to go the distance, but I did have to finish the 10k first before I could do the whole race. I went through the 10k finish, got back onto the race path, and continued to run. I had to play catch-up with the group because when I finished the 10k, they continued on the path, but I did end up catching up with Noah and almost Kristin, to finish the Marathon in 2:08:42. I was extremely pleased with finishing that quickly, for it being my first race ever and only training for the 10k! The program here has been excellent, especially since I live 50 meters from the Mediterranean sea, but I also think I found a new hobby that I can really appreciate, thanks to the experiences offered by my program. This semester will definitely be one to remember.

CEA French Riviera Sophia Antipolis, Spring 2008 Read more about our CEA Content Creators.
Leave a comment
Newest on top Oldest on top
Load more comments
Thank you for the comment! Your comment must be approved first