Black and Abroad: My Study Abroad Story in Spain 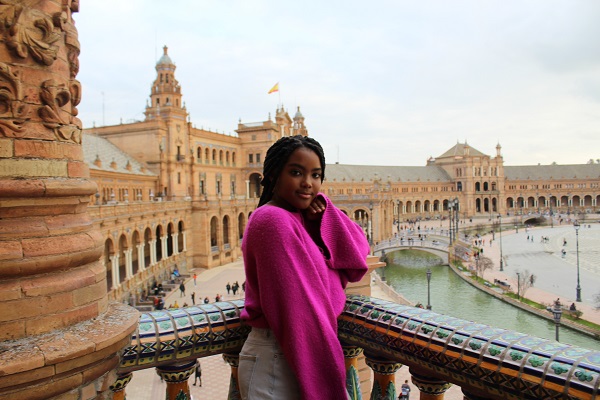 A question many people asked me about my study abroad experience is: “What was it like being black and abroad?" Answering the question now, in hindsight: it was very interesting, and eye-opening in a lot of ways.

Truly, I wasn’t sure what exactly to expect while living and studying abroad in Spain, so I challenged myself to have no expectations and keep an open mind. I’m glad I kept that mindset, because I really enjoyed my time there and would 100% go back.

My first time visiting Spain with my family back in 2013. We did encounter some blatant racism in Barcelona, and it shaped my opinion of the country ever since. When I decided to study in Granada, a city I had never heard of, I was intrigued, but still had fears. Sure, there are Afro-Spaniards, but not many -- and in Spain, as a black woman, you are the minority. Stereotypes exist there much as they do anywhere, and in my two months there, I would classify my experience as eye-opening.

What intrigued me about Granada, and more specifically the south of Spain, was the rich history and the influence of previous civilizations who came before the inhabitants of today. From the outside looking in, Spain looks like a racially homogeneous place, and while that holds true, there are a lot more layers I uncovered.

The culture in the south had a very different vibe, and while strange in some ways compared to my “normal” in the U.S., I found it compelling. Coupled with learning the history, I saw a place that was more ethnically diverse than what meets the eye. Before there was Spain, the Iberian Peninsula was an expansive Muslim empire called Al-Andalus, and the imprint of the cultural influences from Africa and the Middle East are ever present. It’s in the architecture, the food, the people, and it's what kept things all the more interesting. I never learned in school that Africans and Arabs built most of what we know of Spain today, and in the south, many locals can trace their ancestry to Northern Africa.

One of the first things that caught me off guard when I arrived in Granada was that people stare -- a lot. Not just a glance, but stares of fixation, like someone trying to figure you out. A couple of days later, at our first day of orientation, one of the program directors asked the students and I if we noticed lots of stares, and shaking our heads yes, she told us that staring is a very normal occurrence there and part of their culture. I thought, Weird, because that’s the total opposite in the States; stare too long and we may have a problem. I was taught from young to never stare at people, so I thought to myself, well, okay, I’ll just stare right back then, if it’s normal.

Fast-forward two weeks: I was adjusting comfortably, building a strong relationship with my host family, and making friends with other locals and international students. My host family experience was very positive and I feel blessed because I know that is not the case for all. I got lucky with two host parents, two sisters and a roomie from Illinois. The locals were generally welcoming, and I heard more often than not that Granada had turned into both a main tourist attraction and college city with lots of young people from around the world.

I started to form a new and more positive impression of Spain due to these newfound experiences, but still encountered instances where I was reminded that I was different. The most isolated incident was in a store, where I walked into a dressing room, full of women, eyes locked on me, and heard about four different voices talking and laughing about the “chica negra.” I couldn’t make out everything they were saying, but I knew enough Spanish to recognize “black girl.”

On a trip some friends and I took to Cadiz, Spain, for Carnival, I saw a couple individuals in costume dressed in blackface, and some as Native Americans. It really made me wonder what kinds of behaviors and thoughts were normalized there, because to be dressed like that among thousands of locals and tourists from around the globe, and that it would be acceptable, was strange to me.

The diversity I encountered while in Granada was a little different from what one might see in larger cities. I saw many other blacks and learned that with its close proximity to Northern Africa, there had been an increase in immigration over the past few years. As small as the city is, a friend and I were also surprised to find a beauty supply store where we could buy our hair needs and a peluquería (salon) for braids.

Granada is a growing city, and I realized that there was so much to appreciate in my being there. One thing I love about traveling is that it is like a window into the heart and soul of a place. You take a little bit of that place with you and you leave a little bit of yourself there, too. The diversity I brought was very important, and studying abroad as a black woman meant more than just traveling; it was a learning opportunity and a privilege. I had the opportunity because of those before me who paved the way for me to do so, and I did not take that lightly. I was paying homage to those who came before me who never had the opportunity to enjoy the privileges I do today. It also helped me tackle some of my own moments of ignorance and challenged my perspective on lifestyles and necessities.

While traveling as a minority, especially Black, can be daunting, there is so much to appreciate in witnessing the lifestyles and structures of another place. A goal of mine is to see more diverse representation in study abroad, and that starts with equal opportunities for minority students -- meaning more scholarships, available information, and restructuring of programs so that they are accommodating and supportive while domestic and abroad.


Alexis Walker is a CEA MOJO Lite Content Contributor who studied abroad in Granada, Spain, during the Spring 2020 semester. She is currently a student at Hampton University.